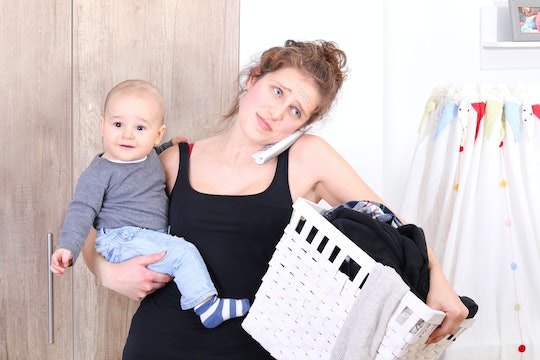 4 Studies About Mommy Brain That Every New Mom Should Read

If you feel like your brain has never quite been the same since you gave birth, you're not alone. Not only are there hundreds of social media posts from moms facing similar "baby brain drain," but there are actually several studies about mommy brain out there that help explain exactly what the phenomenon is and why it happens to mothers everywhere.

Moms describe so-called "mommy brain" as a kind of chronic forgetfulness or absentmindedness that sets in after giving birth, and it's probably scared most new mothers out there, as Parents described it. It's a fair concern: I mean, is this just how you exist as a person now? Will you always be wandering around looking for your baby when you've got her firmly planted on your hip? Do you simply have to get used to constantly searching for the sunglasses that you're already wearing or the phone that's already in your hand? Isn't parenting hard enough without adding this into the mix?

If you're worried, read on to find a good mix of studies about "mommy brain" that every new mom should know about. Whether they're reassuring or not, however, is up to your own interpretation.

If you thought you were simply imagining the changes in your thoughts, think again: pregnancy can change both the size and structure of a mom's brain, and those changes can easily last at least two years after birth, according to a study published in Nature Neuroscience in February.

The areas affected, according to CNN, include brain regions involved in processing others' beliefs, feelings, and thoughts — and the women with the most notable changes in brain size and structure tended to be the ones with the strongest maternal bonds.

That Memory Loss You're Feeling Is Definitely A Thing

That constant memory loss that starts in pregnancy and continues on after birth is totally real, according to a group of Australian researchers. In a study published in 2008, they found that pregnant women suffer the most significant memory loss, followed quickly by new moms. The researchers weren't sure why the memory loss was taking place, unfortunately — but you can at least rest assured that you're not imagining it.

Mommy Brain Can Actually Get Worse With Baby #2

As the younger sibling, I guess I owe my mom an apology — one 2012 study found that the effects of "pregnancy brain" and postpartum "mommy brain" can feel even stronger in successive pregnancies. Researchers found that moms suffer successively worse memory loss with an increasing amount of pregnancies. To be fair, mothers could probably explain this with a simple, "Have you ever looked after multiple children while pregnant?"

Even four and a half months after giving birth, about half of new moms still feel excessively sleepy during the day, according to a study published in PLoS ONE in 2014. Sleep deprivation takes a huge toll on your mental functioning, so it's really no wonder that so many moms feel like they're all over the place.

Growing a child and taking care of a newborn infant requires a strong cocktail of hormones, and a lot of bonding, time awake, and attention — so it's only natural that a few nonessential brain functions (like remembering to buy milk) might go out the window in order to make room for the essentials (like keeping the baby alive).

All in all, it seems like mommy brain actually helps new moms become closer to their new babies — and most moms will tell you that not only do things get better, but it's all so worth it. (You might want to start writing essential things down for the next little while, though.)

More Like This
Introducing My Boyfriend To My Kid
10 Parenting Lessons From Abbott Elementary That You'll Want To Write Down
Experts Explain Whether It’s Safe For Your Baby To Sleep On Your Chest
How Often Should A Toddler Pee When Potty Training? It Depends