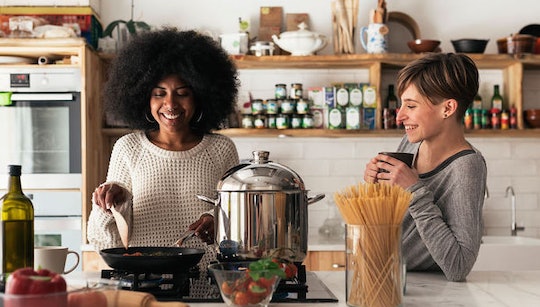 Taking the next step in a relationship can be such an exciting time. However, it also comes along with more responsibility and seriousness. This isn't a bad thing, but there are some key topics for couples to discuss before committing more seriously to a relationship. As long as you agree on these potentially touchy topics, then your relationship will likely keep growing stronger.

Whether you're considering moving in together, getting married, or taking on some other milestone (for some, it can even be the jump from casually dating to let's make this official), it's wise to make sure you're working toward the same goals. That means opening up conversations that most people would rather avoid. And really, simply being able to discuss these tough topics is a skill on its own. "Conflict is inevitable in any relationship, but how couples communicate during a conflict goes a long way toward determining whether the problem will be resolved — or if it will continue to fester and corrode the relationship," said professor of psychology David Ludden, Ph.D. in Psychology Today. If you and your significant other can take on these topics without flinching, then that's a pretty good sign for your relationship all on its own. So if you're ready to discuss the tough stuff, here are some of the potentially difficult conversations that couples need to have before getting super serious.