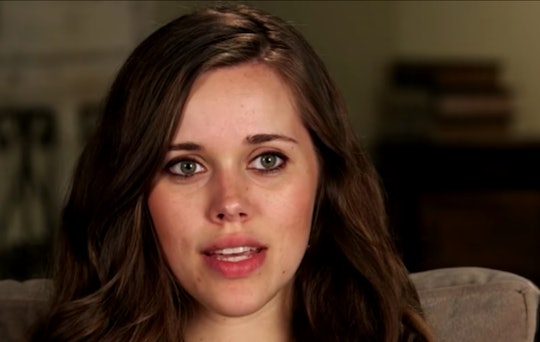 Most people who are aware of the Duggar family probably know that at least a few of the daughters have kids of their own. But one of the Counting On stars tends to be more outspoken about motherhood than some of the others. There have been many times Jessa Duggar Seewald got real about motherhood, on social media and on the TLC network reality TV show about her family.

Jessa doesn't tend to shy away from talking about all of the aspects of motherhood — the good, the bad, and the ugly. In fact, she's been "mommy-shamed" in the past for what she's shared with fans. She posts to her Instagram account fairly often, and almost all of her recent posts on that social media platform are about her kids. Jessa does share a lot of happy moments, and there's no shortage of smiling photos of her sons, Spurgeon Elliot and Henry Wilberforce, who are aged two and 13 months, respectively, according to Us Weekly. But she also gets very honest in her posts sometimes about what motherhood is really like, and how hard it can be no matter how adorable and well-behaved your kids may be.

On Traveling With Kids

On an episode of Counting On, Jessa and her husband, Ben Seewald, traveled via airplane with their two sons. Travel can be tough with kids no matter what mode of transportation you use, but being stuck in a cramped airplane for a long period can be especially rough for little ones and their parents.

In the clip above, Spurgeon fussed quite a bit on the plane, and Jessa said of the experience:

Everybody hates to be that parent whose kid is like, creating a ruckus, and all the other passengers are staring at you like, 'can you control your child? This is annoying.'

But she laughed it off and explained that she and Ben had ways to distract Spurgeon, like with books and toys, on the flight. She did, however, end the clip by saying that when it comes to travel, "it's tough with kids." She was very honest about a struggle many moms are probably familiar with: trying to fly anywhere with your children. Sometimes it won't go smoothly and other passengers will be annoyed. That's just the truth.

Possibly the most infamous example of Jessa getting real about motherhood was a post she made back in October featuring everything from piles of laundry, to dusty furniture, to a sink full of unwashed dishes, and much more in her house. Jessa admitted in the caption that "There's a never ending to-do list. Some of these tasks have been accomplished today, others haven't." And she ended the very honest post with the words, "Just remember, whatever projects are pulling at your time and attention today, don't forget to make time for the people around you. These are the memories that will last forever."

Jessa made it clear that she's not a perfect mom and doesn't keep a perfect house, but that she finds goals like spending time with her kids to be more important. Unfortunately, she got a lot of flack for the post, and people continue to comment on it, with both support and negativity. She doesn't seem to have let any of those replies bother her, though.

When Jessa spoke with People about her first labor, she got right to the heart of the experience when she said:

Labor is hard. It was very intense, very long. Everything was different than I expected.

Jessa had a home birth with Spurgeon, but she lost a lot of blood during the birth and had to be rushed to the hospital. She said one of the worst parts of the experience was having to leave her new baby so soon after meeting him. Jessa told People:

I had dreamed about those first moments, getting to breastfeed right away, all that. And so when I had to go to the hospital, it was a shock.

So she's clearly not interested in sugarcoating the experience for other moms. Jessa admitted that labor was difficult, and that it wasn't all she imagined it would be. Birth is often spoken of as a reverent and beautiful experience, and it can be that for some moms, but it can also be very hard. Jessa was honest about how rough her first birth was for her, which a lot of other mothers probably found very refreshing.

Parents of multiples are very aware of the unique experience that is introducing a new baby to a sibling or to several other kids who are already part of the family. Jessa admitted in an interview with People that after Henry was born, his first meeting with Spurgon wasn't exactly the cute experience some parents might envision. She told People:

We thought, ‘This is going to be so adorable,’ but he wasn’t really sure about it. He thought Henry was a toy, so he wanted to touch his eyes and put his finger in the baby’s mouth.

But if the cute photos and videos Jessa often shares with fans are any indication, Spurgeon and Henry are definitely buddies now, even if Spurgeon didn't know what to do with his baby brother at first. It can be hard for kids to make the transition from only child to older sibling, and hard for the parents who are adjusting as well. Jessa and her family were apparently no different, and she didn't seem to mind talking about that experience.

Jessa never seems afraid to talk about even the tougher parts of motherhood, whether she does so on her show or on social media. But her kids seem healthy and happy, so clearly, she's doing something right.