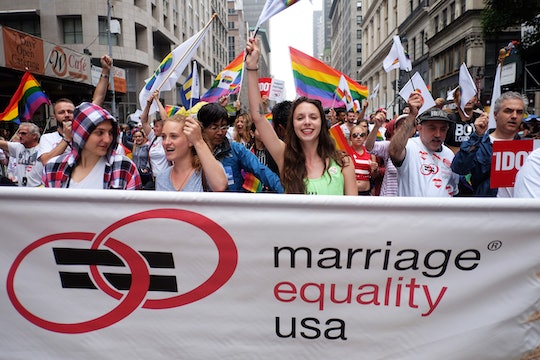 Sunday marks the one-year anniversary of the Supreme Court ruling in Obergefell v. Hodges. SCOTUS' decision made same-sex marriage legal in all states, giving LGBT married couples the same protections that had always been offered to opposite-sex couples. Though Obergefell v. Hodges expanded the national definition of marriage, it couldn't eliminate all of the challenges facing families with same-sex couples at the helm. There are four ways LGBT families are still discriminated against that illustrate how far the United States has to go to establish true equality.

Obergefell v. Hodges did two critically important things, according to SCOTUSblog: it ensured that all states both 1) offer marriage licenses to same-sex couples, and 2) recognize same-sex marriages performed in other states. The Supreme Court opinion in Obergefell v. Hodges outlined four specific supporting arguments. It asserted that everyone has the right to choose whom they marry. The justices wrote that everyone has the "right to marry," especially given marriage's significance in society. They added that same-sex couples deserved the "rights of childrearing, procreation, and education" afforded by a legally-recognized marriage, and they reasoned that marriage plays a critical role in organizing society:

States have contributed to the fundamental character of marriage by placing it at the center of many facets of the legal and social order. There is no difference between same- and opposite-sex couples with respect to this principle, yet same-sex couples are denied the constellation of benefits that the States have linked to marriage and are consigned to an instability many opposite-sex couples would find intolerable.

Universally legalizing same-sex marriage in the United States is an important step forward for the LGBT community. According to The Atlantic, there have been more than 100,000 same-sex marriages since June 26 of last year. At the same time, the Supreme Court's decision did not immediately answer all of the obstacles LGBT families face just to live their lives.

It's hard to build a family on an uncertain financial foundation, but LGBT couples can't always count on employment. A 2014 article in Psychology Today mentioned that résumés indicating affiliation with an LGBT-related student organization reduced an applicant's chances of getting an interview by 40 percent. Psychology Today also reported that "42 percent of LGBT adults experience workplace discrimination," with discrimination more likely against openly-gay employees. Marriage is often a public affair; if an individual marries a same-sex partner, they may be more likely to face repercussions at work if the union is public.

If a marriage ends in divorce, parents may need to navigate custody disputes. This is already tricky territory, but same-sex couples face added complications from potential discrimination in court. The American Association for Marriage and Family Therapy reported that millions of children in the United States have a gay or lesbian parent. Though same-sex marriage is protected, LGBT couples still face stigmas surrounding parenting; some organizations have tried to argue that LGBT parents negatively impact the healthy psychological, social, and sexual development of their kids. A report published by the American Psychological Association found that "there is no scientific evidence that parenting effectiveness is related to parental sexual orientation."

Unfortunately, same-sex couples still fear repercussions for their sexuality in court. Though the American Civil Liberties Union reported that many states are doing their best to ethically resolve custody disputes for divorcing same-sex couples, there have been cases when parents have lost custody of their children because of their sexuality. The ability to adopt and to serve as a foster parent can also be hampered by discriminatory views.

LGBT couples may face more challenges than opposite-sex couples when looking for housing. A 2015 article published by Forbes mentioned that LGBT couples are not protected from housing discrimination under federal law; states can include them as a protected class, but fewer than 50 percent of states did as of last summer. Though the National Association of Gay & Lesbian Real Estate Professionals aims to connect LGBT individuals with supportive and respectful real estate agents, it's still not possible for same-sex couples to definitively count on an easy and ethical home-buying process.

Harassment In Their Everyday Lives

LGBT individuals are commonly targeted in incidents of harassment and violence; they are "the most likely targets of hate crimes in in America," according to The New York Times. When LGBT individuals survive attacks, they may not get the help they need from law enforcement. A March 2015 report published by The Williams Institute indicated that 48 percent of LGBT victims reported police misconduct; in 6 percent of cases, police officers were actually reported as offenders. Despite advances in legislation that protect members of the LGBT community, University of California, Davis psychology professor Gregory M. Herek told The New York Times that they're still in danger: "Unfortunately, we just have to accept the fact that stigma based on sexual orientation is still widespread. Overcoming those prejudices is a lot of work."

Legalizing same-sex marriage nationally is a powerful move. But even now, more protections are needed to ensure that LGBT couples can live lives uninterrupted by discrimination.