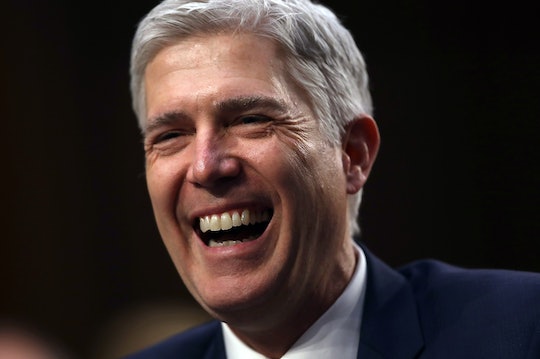 The Senate voted 54 to 45 on Friday morning to confirm Judge Neil Gorsuch's appointment to the Supreme Court, following the Republicans' deployment of the so-called nuclear option on Thursday, which changed Senate rules so that the judge could be voted through with just a simple majority. Now, parents are wondering how many ways Neil Gorsuch’s confirmation could affect families, because all this controversy wasn't for nothing. Taking into account both the pending cases before the Supreme Court and Gorsuch's record on previous rulings, the outlook is concerning.

According to analysis by The Washington Post, Gorsuch will be the most conservative judge on the Supreme Court, and he's even more conservative than his predecessor, the late Justice Antonin Scalia. This should come as no surprise, since President Donald Trump vowed to appoint "pro-life" judges during a 60 Minutes interview in November. During that same interview, when questioned on whether his goal was to repeal Roe v. Wade, he refused to give a straight answer, flippantly suggesting that reproductive rights laws "would go back to the states," and women could then travel to other states for abortion if necessary. For better or for worse, it turns out that Trump does occasionally fulfill some of his campaign promises.

Of course, it's not all over yet. Gorsuch is simply replacing another conservative, which rebalances the Supreme Court to four conservatives, four liberals, and one moderate judge. The real problem comes if and when Trump appoints another judge. The average retirement age for a Supreme Court justice is 78.7. The lone moderate currently on the bench, Justice Anthony Kennedy, is 80 years old. Liberal Justices Ruth Bader Ginsburg and Stephen Breyer are 84 and 78, respectively. If any of them die or retire during the Trump administration, the balance would be tipped for decades to come. Knowing that, let's take a look at where Gorsuch stands on matters that effect families.

When Utah Gov. Gary Herbert denied federal funding to Planned Parenthood, Gorsuch took his side. And he's twice upheld an employer's right to deny birth control coverage. If a woman is forced to carry an unwanted pregnancy, that can have psychological and financial consequences that affect the whole family. And let's not forget, Planned Parenthood offers many other health care services.

While serving on the 10th Circuit Court of Appeals, Gorsuch twice sided with convicted felons who were in possession of firearms, according to Politifact. He's also been endorsed by the NRA. The Supreme Court is scheduled to determine whether the Second Amendment protects the right to carry a concealed firearm soon.

Gorsuch is a big fan of "religious freedom," a term that's often used to justify denying people's civil rights. He sided with Hobby Lobby when the company sought to restrict employees' access to birth control, signaling the possibility that he might uphold the "right" of a restaurant to refuse service to a family with gay parents, or a school to deny a transgender student access to the appropriate bathroom.

Looking Out For The Little Guy

If a parents' livelihoods are jeopardized by big business, don't expect any help from Gorsuch. The case of TransAm Trucking v. Administrative Review Board concerned a truck driver whose rig broke down and stranded him in sub-zero temperatures without a working heater. After waiting for roadside assistance for hours until he couldn't feel his extremities, the trucker unhitched the trailer from the truck and left. His employer fired him for it, and Gorsuch sided with the trucking company, dismissing the life-threatening temperatures the man endured as simply "unpleasant."

The Trump administration, backed by a Republican-ruled Congress, has already enacted far too many laws and policies that threaten kids and families. If the Supreme Court doesn't stop them, what's left?