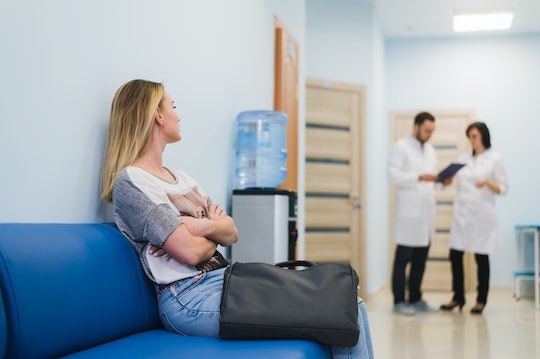 It's not particularly difficult to find examples of how gender bias and sexism work against women on a daily basis. We're paid less in our jobs, for example, and while many men are involved fathers and partners, we still take on a disproportionate amount of caregiving work and unpaid domestic labor. But what might not always be as obvious is the way that that same gender inequality also affects women's health care. Studies have shown that women are definitely at a disadvantage when it comes to having their concerns taken seriously by medical professionals, and if you have kids, it could be even worse. These four ways science conditions moms to ignore their health problems have a measurable — and possibly very dangerous — effect on women's health.

A hospital emergency room or physician's office doesn't always seem like a place where a woman would expect to encounter blatant sexism, but research into the "gender health gap" has found that there are a lot of unfair gender biases in medicine that stand in the way of women getting the kind of care they need, and it's subtle enough that even otherwise-well-intentioned doctors can be perpetuating it. Yet studies are showing quite clearly that women are not always given the same level of care compared to men, and it's literally leaving women in pain and suffering in silence.

In 2014, researchers at Brigham & Women's Hospital in Boston published a report that found there are major gaps in medical research when it comes to women's health. One reason why? Women are generally not enrolled in clinical trials as often as men are, and even when they are, the research findings are not always analyzed or reported in terms of sex differences. The problem though is that men and women don't always experience illness the same way, or respond to treatment the same way. In other words, when men make up the bulk of research participants — and when the findings are presented as being gender-neutral — it ultimately means that women are being diagnosed and treated in ways that may or may not actually help them.

One glaring example? Cardiovascular disease (CVD). According to the Brigham & Women's Hospital report, "CVD affects women and men differently at every level," and women have different risk factors, symptoms, and outcomes than men do. In fact, more women actually die from CVD each year compared to men, yet still, the majority of clinical trial subjects are men (65 percent, according to the report), and two-thirds of studies fail to report research outcomes by gender.

Women Are More Likely To Be Misdiagnosed

The average millennial mom might not be overly concerned at this point about the lack of research into cardiovascular disease (according to the National Institutes of Health, a woman's CVD risk increases around age 55), but the unfortunate reality is that the overall lack of sex-specific health research makes it likely that she'll be misdiagnosed with other issues much earlier on in her life simply because she's a woman.

For one, that's because doctors tend to take women's concerns less seriously. According to The Independent, women are more likely to be wrongly diagnosed with mental health issues (even when presented with measurable physical symptoms) and given psychotropic drugs than men are — especially when it comes to chronic pain. According to Women's College Hospital in Toronto, Canada, doctors tend to treat female patients with chronic pain as though the cause is psychological, and are "more likely to refer women to a therapist rather than a pain clinic."

Ironically though, women actually suffering from mental illnesses are also more likely to be misdiagnosed. According to Brigham & Women's College, "women with depression are misdiagnosed from 30 to 50 percent of the time," and are more likely to have their symptoms (fatigue, insomnia, anxiety, and pain) wrongly associated to other illnesses." And that misdiagnosis only becomes more pronounced for new mothers: according to the American Psychological Association, postpartum depression is thought to affect around 1 in 7 women, but according to Postpartum Progress, studies suggest that it goes undiagnosed as much as 50 percent of the time.

For all the talk about women being warriors for making it through things like pregnancy and child birth, the reality is that we're still largely viewed as the weaker sex — even by medical professionals who ought to know better.

According to The New York Times, a 2008 study published in Academic Emergency Medicine found that women suffering from acute abdominal pain were 13 to 25 percent less likely than men to receive opioid pain medication. And when they did, they had to wait longer: on average, men received pain medication after waiting for about 49 minutes, while women had to wait for 65 minutes.

But it's definitely not just abdominal pain: according to a 2010 report published by The Campaign To End Chronic Pain In Women, studies found that female emergency room patients treated by paramedics were less likely to receive morphine than men with similar presenting symptoms, and a similar study found that women who'd suffered severe arm or leg injuries were less likely to receive pain medication before arriving at the hospital than men were. Part of the reason, it seems, is that women are more likely to be assumed to be overreacting or exaggerating, according to The Independent — while men, on the other hand, are more likely to be taken at their word.

As bad as it is to know that mothers often have their mental health concerns overlooked or misdiagnosed, what's just as awful is the fact that women's physical illnesses are often downplayed after they give birth. According to Cosmopolitan, a 2015 study in the British Journal of Obstetrics and Gynaecology found that, after a year and a half postpartum, 24 percent of women were still experiencing pain during sex. A separate 2015 study also found that 77 percent of mothers studied had persistent back pain a year after having their babies (!), and 49 percent had urinary incontinence (!!!). And if that wasn't bad enough, a 2015 University of Michigan study that evaluated 68 women at seven weeks postpartum found that 29 percent "had evidence of fractures they never even knew they had in their pubic bones," while 41 percent had undiagnosed tears in their pelvic floor muscles.

If those statistics seems horrifying, well, they probably should. But the reality of the gender health gap also means that they probably shouldn't be all that surprising either. Research now supports what many women have long known to be true: that medical professionals don't always take their concerns seriously. But while that obviously means that women are left to struggle unnecessarily, it also means that we are being inadvertently taught to dismiss our own pain, and to not trust our own experiences. And when you're told that you've overreacting, you start to think that perhaps you really are — making you less likely to take your pain as seriously in the future.

The good news at least is that finally, there is data to prove that this phenomenon exists, and it's a big step forward to allowing women to get the kind of medical care they need. But it's clear that there's still a long way to go, and that, unfortunately, women will still need to be their own biggest advocates within a system that doesn't always work for them.