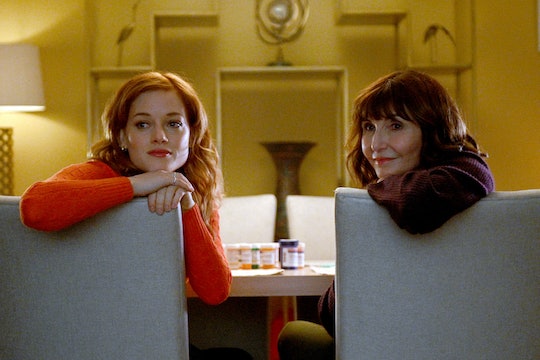 How To Build A More Real Connection With Your Parent

They drive you crazy... they might call you a thousand times a day, and likely spent a chunk of your teen years embarrassing the living daylights out of you. But you only have one set of parents. Beyond calling them whenever you need something, or having the same daily small talk to check that nothing catastrophic has happened to either party, it's important to build an authentic connection with your parents.

In the case of Zoey Clarke (Jane Levy), the central character of Zoey's Extraordinary Playlist, building an authentic connection with her father is of prime importance. After Zoey experiences a freak accident in the middle of an MRI, she is able to hear the innermost thoughts of everyone around her. An extra-practical, serious coder who prefers podcasts over playlists, this is one of Zoey's worst nightmares.

The silver lining, however, comes in a renewed ability to communicate with her father Mitch (Peter Gallagher). He suffers from a degenerative neurological condition that leaves him unable to communicate, move, or chew. It's difficult on the entire family, especially Zoey's introverted, caring mother Maggie (Mary Steenburgen). But with Zoey's newfound abilities, she's able to see her father, healthy as ever, communicate his love and pride for her though song.

According to Zoey, here are the various ways that you can build a more authentic connection with your mom or dad. Watch and learn with Zoey's Extraordinary Playlist, now streaming on NBC.

1. Get in touch with old memories

Though Zoey may not be able to speak to her father in his present state, their family home is still decorated with photos from happy times and family vacations in the past. She remembers how much her father loved sailing, and it's right when she's looking at an old photo that she has an unprecedented and moving breakthrough with him.

At her rock bottom point in the first episode of Zoey's Extraordinary Playlist, Zoey finds herself at a crossroads — she feels like she's flailing in every aspect of her life: with work, romantically, and elsewhere. The one person who made her feel like everything would be OK is there but... not there. This is when she finds that the "song in her head" issue gives her an incredible and unique ability to communicate with her father. And it's a rare moment of emotion and vulnerability that unlocks a song in her father's heart – he sings to her, letting her know he’s still right there with her – and gives both parties a comfort that they haven't experienced in a long time.

Upon finding out that her father is able to process everything going on around him, Zoey makes it her mission to bring the life her father loved back to him. She insists to her mother and brother on taking him sailing. Though at first met with resistance, the rest of her family realizes that getting him out into the world is just what he needs. A little joy in the form of a favorite activity with his family opens him right up, and helps him turn a serious and hopeful corner.

4. Take care of them like they took care of you.

It's natural that we're all a little protective of our parents. But often, once you reach a certain point in your life, it's normal to have your parents depend on you — for advice, care, and more. This is how Zoey's relationship with her father evolves... as well as her mother. In seeing her mother handle her father's decline, Zoey becomes more of a confidante and an equal than the daughter. But ultimately, this deepens everyone's relationships, and establishes a deeper, more authentic connection between all parties.

This article is sponsored by Zoey's Extraordinary Playlist, which is now streaming on NBC.