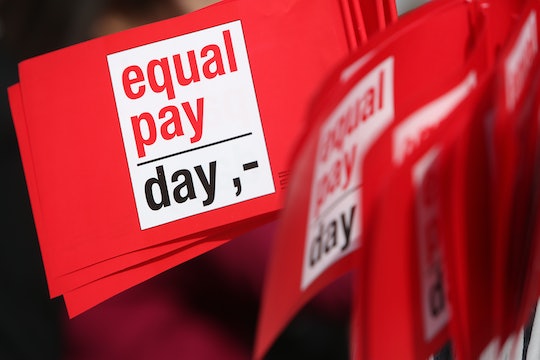 4 Ways To Fight The Gender Pay Gap, Because It's Time To Shut It Down

Happy Equal Pay Day! (Just kidding.) I mean, April 12 is Equal Pay Day but it isn’t a “holiday” or a day we should be happy about because Equal Pay Day only exists because gender discrimination exists. Because the pay gap persists, and because, in 2016, inequality is a reality American women still face. In fact, it is a reality many women face worldwide. But how can one fight the gender pay gap?

First, let’s review the facts: on average, American women make 79 cents for every dollar men make, according to USA Today. However, the pay gap is significantly higher for minority women: African American women are typically paid 63 percent of what men are paid, Native American and Alaskan Native women are paid 59 percent, and Latina women face the largest gap, making just 54 cents to every male dollar, according to the American Association of University Women (AAUW).

And, while it may seem insignificant and unsubstantial to some, the gender pay gap hurts women, it hurts their families, and it hurts our economy. Besides, how many men would view a 21 percent reduction in their salary as “no big deal?”

So here are four ways women and men fight the gender pay gap.

Women Can & Should Ask For More

During the hiring process, companies offer women anywhere from 3 percent to 30 percent less than their male counterparts, according to Hired. And, often, that's for the same position or role. And, not only are companies offering less, women are asking for less. Known as the “expectation gap,” the average woman asks for $14,000 less than the average man. The good news is that, according to the report's author, and data scientist, Jessica Kirkpatrick, women who ask for what they are worth, and what they want, tend to get it.

Women who ask for the same salary as men in the same role tend to get offers in line with what they are asking.

In short, women shouldn't sell themselves short and they should always negotiate.

Ask your local representative and senator to support the Paycheck Fairness Act by sending the template on AAUW.

As someone who formerly worked in HR, I firmly believe all companies are responsible for starting a dialogue with their directors, their senior leaders, and their hiring managers about conscious and unconscious gender discrimination. (And this is true for male and female leaders.) Because Presidents, CEOs, and other executives are responsible for speaking openly and honestly about their biases and why they are problematic, and they are responsible for training their leaders and managers to understand the business benefits of diversity and gender equality.

Talk To Men About The Issue

And finally, one of the biggest ways we can work to solve the gender pay gap problem is by speaking to men. You see, women cannot solve this problem — or the greater issue of gender discrimination — alone. Yes, we women are the ones most affected by said problems, but men can listen, men can help, and men have valuable input, too. So speak to the men in your lives — your children, your grandchildren, your brothers, cousins, coworkers, and husband — and let them know why you matter. Because the gender pay gap has effects on the families, children, and partners of women around the world.

More Like This
8 Solid Reasons Why You Should Travel By Train On Your Next Family Vacation
The Home Edit's Clea & Joanna Reveal The Grossest Things Their Kids Have Left In The Car
2 Million MamaRoo Swings & 220,000 RockaRoo Rockers Have Been Recalled
These Capri Sun Pouches Have Been Recalled Because They May Contain Cleaning Solution