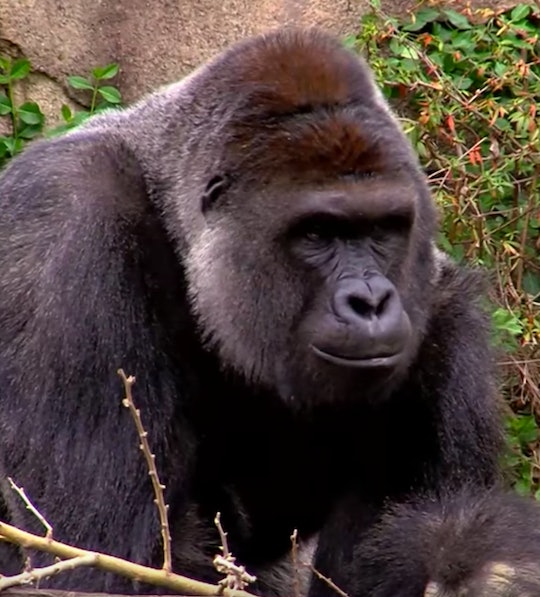 Sad news from the Cincinnati Zoo this weekend: On Saturday afternoon, a 4-year-old boy fell into a gorilla enclosure, and a male gorilla was killed to save him. After the boy climbed into the enclosure and subsequently fell about 10 to 12 feet into a moat, a 400-pound western lowland gorilla named Harambe began pulling him around. Although the zoo's director told reporters that Harambe did not attack the child, he was nevertheless in danger because of the animal's size and strength, and zoo officials decided to shoot and kill him while the boy was in between his legs.

"It's a sad day all the way around," zoo director Thane Maynard said during a press conference. "They made a tough choice. They made the right choice because they saved that little boy's life. It could have been very bad."

The boy survived with non-life-threatening injuries after spending about 10 minutes trapped in the enclosure, from which two female gorillas were removed after he fell. The zoo's Dangerous Animal Response Team considered the situation to be life-threatening and opted to shoot Harambe with a rifle instead of tranquilizing him because a tranquilizer would not take effect instantaneously.

Now, the Cincinnati Zoo's "Gorilla World" exhibit will be closed until further notice (Thane noted that in 38 years no zoo patron has ever entered the enclosure) but the zoo itself is open despite the incident.

Harambe previously lived at the Gladys Porter Zoo in Brownsville, Texas, before being transferred to the Cincinnati Zoo in September 2014. The day before it made the call to kill him to save the boy, the zoo celebrated his 17th birthday. At the press conference, Maynard called him a "good guy" and noted that because there are relatively few western lowland gorillas in captivity, the zoo had hoped to encourage Harambe to mate with the female gorillas.

And when Harambe first met the two females he was sharing an enclosure with until he died Saturday, the zoo reported that introductions were going quite well in this breathtaking video:

The World Wildlife Fund classifies the species as "critically endangered."

The zoo did save the boy from what certainly could have been an (even more) disastrous situation for him and his family, but some expressed dismay and anger that an animal living in captivity was killed over what they saw as the folly of both the zoo and the boy's caretaker(s).

Decisions zoos make about animal life are often controversial, like when a Danish zoo made headlines in 2014 because it killed a healthy baby giraffe named Marius to feed it to lions while visitors watched. And parental judgment can have horrible consequences: In 2012, a mother placed her 2-year-old on a railing to give him a better view of a wild dog exhibit at the Pittsburgh Zoo, and the toddler lost his balance, fell into the exhibit, and was immediately mauled and killed by the dogs.

Following the tragedy in Cincinnati, the zoo does not plan to stop its gorilla program, however. Its website details plans to open an indoor Gorilla World habitat to the public in 2017 so that guests can enjoy the gorillas for five more months out of the year. Maynard said that the boy managed to traverse the protective rail, get through the wires, and make his way over the moat wall. If the zoo moves forward with these expansion plans, it will surely (or should surely) enhance its security measures and protective barriers to ensure that nothing like this ever happens again.