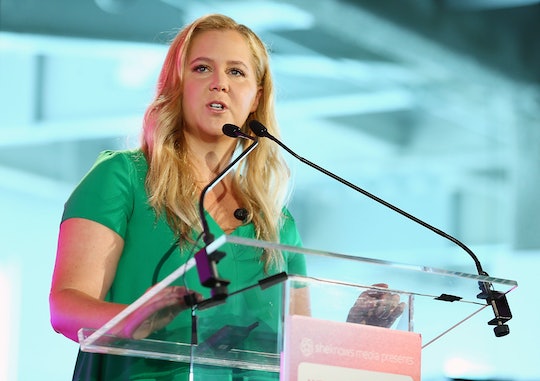 Aside from those lucky few women who seemingly glide through pregnancy without a single ache or pain, the majority of expecting moms deal with some degree of unpleasant pregnancy symptoms. Nausea, vomiting, constipation, heartburn, hemorrhoids, back/rib pain, swelling — the list goes on and on. However, for a small percentage of pregnant women, nausea and vomiting so unrelenting that they can hardly function is their reality. In fact, there are five celebs who've both suffered from hyperemesis gravidarum and shared their struggles, too.

As BabyCenter explained, hyperemesis gravidarum (HG) affects up to 3 percent of expecting moms. And although it's often referred to as a serious form of "morning sickness," the reality is far more severe. That's because women with HG vomit so often that they have a difficult time keeping enough food and fluids down. This can ultimately lead to dehydration, weight loss, and other complications, resulting in hospitalization. So yeah. HG definitely is't your run-of-the-mill morning sickness. Because it can last all day, every day for weeks — and sometimes even months — on end.

With this in mind, let's take a look at some celebrities who have opened up about their experiences with HG. Because until recently, the condition was relatively unheard of in mainstream media. There's ...

Actress and comedian Amy Schumer is the most recent high-profile celeb to open up about her struggle with hyperemesis gravidarum. As E! Online reported, the mom-to-be took to Instagram on Nov. 15 to announce she had to cancel stand-up performances because of it. "Texas I am so deeply sorry. I have been really looking forward to these shows. I have to reschedule," she wrote alongside a photo of herself lying in a hospital bed. "I am in the hospital. I’m fine. Baby’s fine but everyone who says the 2nd trimester is better is not telling the full story. I’ve been even more ill this trimester." She went on to explain:

I have hyperemesis and it blows. Very lucky to be pregnant but this is some bullshit! Sending so much love to the doctors and nurses taking great care of me and Tati! They are cool as hell! And Texas I am really really sorry and I’ll be out there as soon as I’m better.

For me at least, it was Kate Middleton who put the term "hyperemesis gravidarum" solidly in my vocabulary. That's because the Duchess of Cambridge was hospitalized for HG back in 2012, when she was pregnant with Prince George, Forbes reported. Unfortunately, she's gone on to struggle with the condition during all of her pregnancies so far. Kensington Palace even included this info in a news release when it was announced the Duchess was expecting baby number three. "As with her previous two pregnancies, The Duchess is suffering from Hyperemesis Gravidarum," the palace's official Twitter account tweeted in September, 2017. "Her Royal Highness will no longer carry out her planned engagement at the Hornsey Road Children's Centre in London today. The Duchess is being cared for at Kensington Palace."

The American Idol alum and mom of two hasn't been shy about her horrible experience with pregnancy-related nausea and vomiting, either. "I vomit a good dozen times a day it's like bad. I vomited before coming out here," Clarkson told Ellen DeGeneres when she was pregnant with her daughter, River Rose, according to Us Weekly. "I'm not even kidding, it's so bad. It's so bad. It's, like, so gross." She went on to add:

I had one day — it was either before Thanksgiving or the day after Thanksgiving, I can't remember — I didn't throw up one time that day. I literally cried to my sister and mom I was like, 'It's over.' They said it would be abrupt and it would just end. Then the next day, nope, it just picked on right back up.

In case you were wondering, the same scenario played out when she was carrying her son, Remi. “I’m familiar with all-day sickness,” Clarkson said during an interview on CBS This Morning, according to People. “I have to get IVs and fluids because I get so dehydrated. It’s really bad.”

Kim Kardashian had notoriously difficult pregnancies with her first two children, North and Saint West — including placenta accreta, which nearly caused her to bleed to death after giving birth. Something else she dealt with? Yep, you guessed it: Debilitating vomiting and nausea. "To be honest, I’ve had really bad morning sickness, day sickness, night sickness — I can barely get out of bed," Kardashian told Us Weekly in 2015, when she was pregnant with Saint. “It’s a very different type of pregnancy from my first one, but I'm so grateful to be pregnant when we didn't even think it was going to happen for us [so] I don't care how sick I am.”

Although (like Clarkson) Mowry never actually threw out the term "hyperemesis gravidarum," she did have a particularly rough time with nausea and vomiting throughout her entire first pregnancy. "The worst part about pregnancy would definitely have to be my nausea," she said in 2012, according to NPR. "Mine happened in the morning, afternoon and in the evening and, not only did it just happen in the first trimester, it happened throughout my whole entire pregnancy."

Thankfully, though, her second pregnancy was a vastly different experience, Us Weekly reported. “I had nausea with my son throughout my whole entire pregnancy and it was terrible,” she said. “This time around, I only had it in the first trimester and I didn’t think it was going to go away. When it went away, I was like, ‘Hallelujah. This is what it feels like?’”

So next time you hear anyone brushing off debilitating nausea and vomiting as "just morning sickness," kindly refer them to the first-hand accounts of the celebrities on this list. Because if you ask me, non-stop vomiting that leads to chronic dehydration lasting for months — and possibly an entire pregnancy — sounds like hell on Earth.