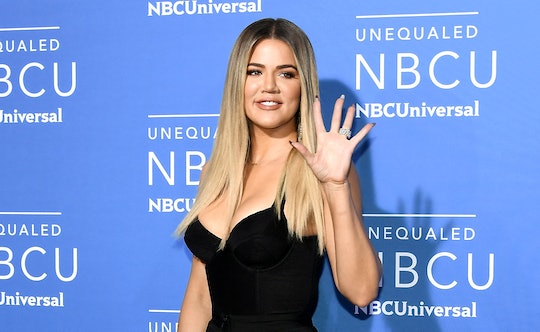 Clues That Khloé Kardashian & Tristan Thompson Are Staying Together, According To Fans

It's been about a week since all the drama in the world dropped, and there's still no word about the fallout. But there are a few clues that Khloe Kardashian and Tristan Thompson are staying together, if you read between the lines. First of all, let's cover a little bit of the background story, just in case you haven't been glued to your phone slurping all the celebrity tea over the last few days, because there's a lot to unpack.

On the evening of April 9, the Daily Mail published a video that allegedly showed Thompson kissing another woman at a nightclub the previous weekend. Soon after that, TMZ published its own video that appeared to show Thompson arriving at a hotel with the same woman later that night. The next morning, as Kardashian reportedly went into early labor, TMZ published yet another video claiming it showed Thompson kissing and groping with two or three additional women last October. Thompson's and Kardashian's reps didn't immediately respond to Romper's request for comment. Kardashian gave birth the next day, and her birth announcements are the only official statements we have to go on, so let's parse those for all they're worth.

Kardashian posted a photo of a very pink balloon- and flower-filled nursery to Instagram and her personal website on Monday acknowledging her daughter's birth. The Instagram caption makes no hint at the trouble in paradise:

Of note: Kardashian gave her daughter Thompson's last name, something she did not have to do. She also wrote on behalf of Thompson ("our," "we"), which would be a weird thing to do if she'd dumped him and had nothing to do with him when she wrote it. As for that name, more than a few fans have speculated that it might be a jab at the father's alleged infidelity, but according to The Cut, that was Kardashian's great-grandfather's name, so we might be reading into things here. Besides, would you want to be reminded of your baby daddy cheating on you every time you spoke your daughter's name? Yeah, me, neither.

As much as Kardashian's fans seem to hate Thompson, it looks like she's taking the high road all the way. The announcement on her website looks like a more traditional birth announcement you might mail to friends and family. The text from the Instagram caption is repeated, but underneath that, there's a "card" bearing True's birth date, and measurements, signed from "Proud parents Tristan Thompson & Khloé Kardashian." Once again, she spoke for Thompson, and she even put his name first, something that my petty self wouldn't have even considered, had I been in her shoes.

Then, we have the tabloid rumors, and they are all over the map. TMZ has reported that Kardashian is "nowhere near forgiving Tristan," and "once Khloe's medically cleared to fly, she's getting the hell outta Dodge and bringing True back with her to L.A.," adding that the couple's relationship status is "tenuous at best." Based on sister Kim Kardashian's tweet about Khloé pushing, we can assume that she gave birth vaginally. According to Baby Center, that means she'll be OK to fly sometime in the next week, so it won't take long to see if that claim pans out.

They Do Have A Kid, After All

Meanwhile, an unnamed source told Hollywood Life that "Tristan insists he was set up, and that things aren't as they seem," and "Khloe has basically bought Tristan's story and excuses hook line and sinker, and right now she has no intention of leaving him at all." That's some far-reaching conspiracy, alright. However, the source also adds that "she's giving him the benefit of the doubt for the sake of their new family," which, when taken with the birth announcements, certainly seems plausible. They sure wouldn't be the first couple to stay together for the sake of the kids, and the unofficial Kardashian-Jenner motto is "family, über alles."

She's Not A Quitter

Most believable is Us Weekly's claim that Kardashian is "willing to forgive this massive indiscretion" because "when she loves, she really loves unconditionally." For evidence of that, look no further than her relationship with Lamar Odom, with whom she filed for divorce amid cheating and substance abuse allegations, only to nurse him back to health after he was reportedly found unconscious at a brothel. Their divorce was finalized nearly a year and a half (and two or three boyfriends) later. Apparently, it takes a lot to make Kardashian drop someone for good, and it seems that her definition of "a lot" is much different than yours or mine.