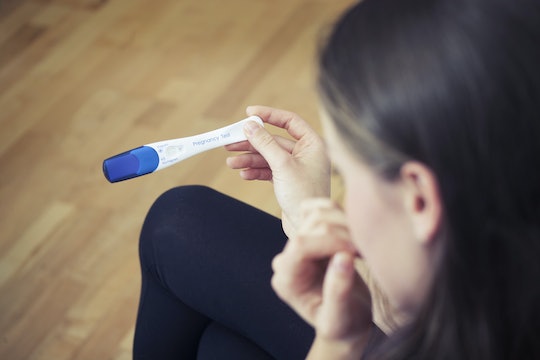 No matter the result you're anticipating, there's something about taking a pregnancy test that makes you feel like no matter how many times you read the instructions, you're doing something wrong. I mean, the concept is basic: pee on a stick and it will tell you whether or not a tiny person will soon reside in your uterus. But sometimes carrying it out feels like you're getting graded, even though it's not that kind of test. Though the process is simple enough, there are a few common pregnancy test mistakes you're probably making that will cause you to stress out more than you already are and possibly skew your results.

I remember when I saw the first positive on my pregnancy test. Though I read (and re-read) the instructions, I was convinced I did it wrong. Of course, the next four pregnancy tests yielded the same result: pregnant. But because of my incessant disbelief of the result and the conviction that I was somehow messing the process up, I caused myself unnecessary stress that could have been avoided had I had confidence in my abilities to pee on a stick.

Although most of these mistakes can simply be summed up with the phrase "follow the instructions on the box," sometimes that is easier said than done. Whether it's with high levels of anxiety or anticipation that you take the at home pregnancy test, it's important to make sure you're doing it correctly, because whether or not you're pregnant isn't really something to leave up to chance.