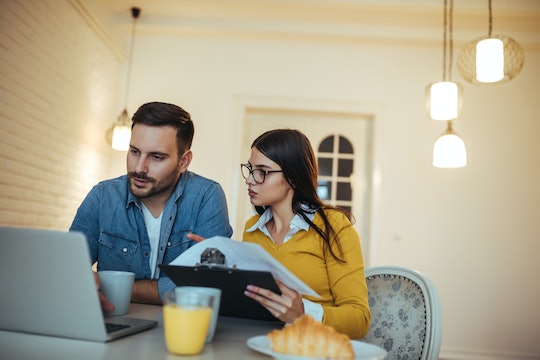 The 5 Biggest Tax Filing Mistakes Parents Make, According To An Accountant

It's the most horrible time of the year: tax season. It's probably safe to say that no one has ever looked forward to filing their taxes, and it's no wonder, when something as simple as checking the wrong box could cost you some serious cash. So what are some of the biggest mistakes parents make when filing their taxes? It pays to know what you're doing (literally).

The truth is, parents have a lot more to consider at tax time than their childless counterparts, and it's not as simple or straightforward as you might hope. There are a variety of factors that will affect how you file, including the size of your family, the ages of your kids, and whether or not you're married. So before you sit down to sort through all your statements and receipts (what fun!), you'll want to find out exactly where you stand and what the IRS needs from you to make sure you don't end up shelling out more than absolutely necessary.

Romper reached out to Megan McManus, Tax Manager at San Francisco Bay Area accounting firm Sensiba San Filippo, to find out more about some common missteps parents make when filing — as well as what you can do to avoid them (and hopefully make the process a little less painful!).

More Like This
Tips For Apple Picking With Kids
If Breastfeeding Makes You Tired, Here’s How To Keep Your Energy Up
These 9 Potty Training Techniques Will Work On Even The Most Stubborn Toddler
Here's How To Handle Potty Training During Nap Time