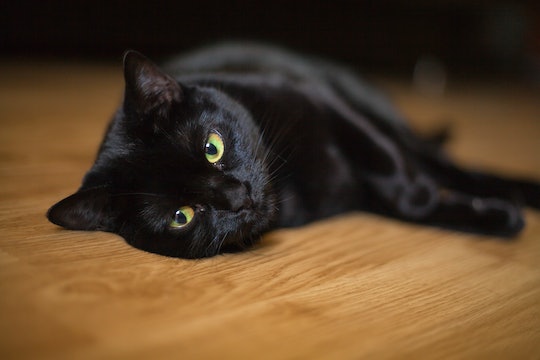 I spontaneously adopted a cat once after seeing a sign on a dirt road that read, "Free Kitties." My roommates were less than impressed because this cat was a little wily. From talking with other cat moms though, it sounds like a whole lot of cats put out "you can't tame me" vibes. But is that just a cat myth, or is it fact? That got me wondering about some of the creepiest myths about cats, and how some of them just seem so... well... true. I'm not going to lie, I cross the street whenever I see a black cat.

Alas, it's time to debunk some of these cat legends. First, I hate to break it to you but the myth that cats can't be trained, is a total falsehood, according to animal trainer Samantha Martin, in an interview with Huffington Post. “Although behaviors such as litter box avoidance, aggression and furniture scratching are not pleasant to live with, they can be changed through a combination of behavior modification and simple changes to the environment," explained Martin in the same Huffington Post interview. I'll have to tell that to my friend who has a gorgeous Himalayan cat that refuses to go to the bathroom anywhere but the bathroom sink!

But, now let's get to the real spooky stuff. We've rounded up five of the most terrifying cat myths that just may have been keeping you up at night.