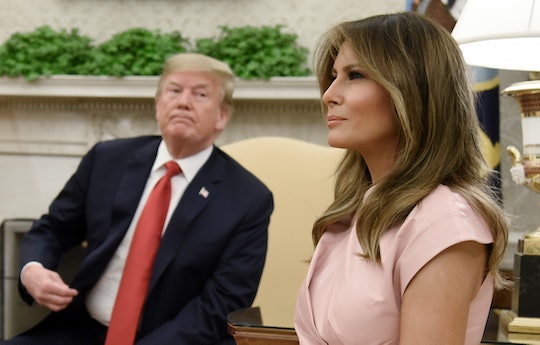 Donald Trump Has Said Some Seriously Creepy Things About His Wife, Melania

It's safe to say that President Donald Trump and his wife, Melania Trump, have a relationship that everyone is curious about. She is his third wife, but she's only ever been married to him. She's a dutiful First Lady, but didn't move into the White House with her husband right away. There have been periods of time where no one has seen her for awhile, and other times where she seemingly makes the rounds to support her husband's administration. It's definitely an interesting partnership. But it's fair to say that there are a lot of pretty creepy things Trump has said about Melania, and many of them have never really been satisfactorily explained by either of them.

Melania gave birth to her son, Barron Trump, on March 20, 2006. And some of the creepy things Trump has said about Melania are specifically about her role as a mother and wife. Remember, in general, Trump is not known for erring on the side of caution when it comes to sexist remarks — does everyone remember the infamous, "Grab them by the p*ssy. You can do anything," comment? Of course you do, because how could any of us forget?

People who aren't Melania may never know for sure whether she just doesn't mind any of the creepy comments Trump has made about her over the years, whether she's forgiven him for them, or whether she has any issue after the fact. But one thing is for certain: there isn't really a shortage of these weird remarks.

"How do the breasts look?"

Radio personality Howard Stern once asked Trump what he would do if Melania were in a bad car accident, according to GQ. Trump reportedly responded, "How do the breasts look?” Which, frankly, is not the first question you'd think a person would ask about a situation in which their loved one was injured in an accident, even a hypothetical one.

Stern apparently responded, "The breasts are okay." So Trump replied, “Because that’s important.” This exchange definitely comes across pretty creepy if you ask me.

Speaking of Stern, there's actually quite a few creepy things Trump has said about Melania during one of his radio appearances with the shock jock.

During an appearance on Stern’s show on December 7, 2005, Trump reportedly said of his wife, who was pregnant with Barron at the time, "You know, Howard, she’s got the kind of a body and makeup where, about one day after the baby, it’s going to be the same as it was before," according to The Washington Post. When Stern joked, "You’re giving her one day?," Trump responded, "One or two."

Another one from the Stern files. Trump reportedly once boasted to Stern that he could trust his wife, Melania, to take her birth control each day, according to The Washington Post. It's not entirely clear why this was something Trump felt listeners needed to know.

In 2004, Trump reportedly said of his wife on Stern's show, "[Melania] is terrific in bed. She wouldn’t want me to say that, but she is," according to HollywoodLife. President Trump was clearly not shy about talking about their sex life before he decided to run for the highest office in the land.

This one is more sad than creepy. At the 2018 Gridiron Club Dinner, President Trump reportedly joked, according to The Independent:

So many people have been leaving the White House. It’s actually been really exciting and invigorating. … I like turnover. I like chaos. It really is good.

Now the question everyone keeps asking is, ‘Who’s going to be the next to leave? Steve Miller or Melania?’ ... That is terrible honey, but you love me, right? ... I won't tell you what she said. ... She said, ‘Behave.’ ... Is that terrible?

Trump has also reportedly admitted to feeling Melania up in public, and joked that he "got her for the right price," according to Newsweek. That last one was in reference to Melania being on a New York City billboard ad, but it's still a pretty weird thing to say in reference to your wife.

As Trump's presidency continues, there will likely be plenty of opportunities for him to say something about his wife of 13 years. Hopefully, most, if not all of the remarks, will be more complimentary than creepy.