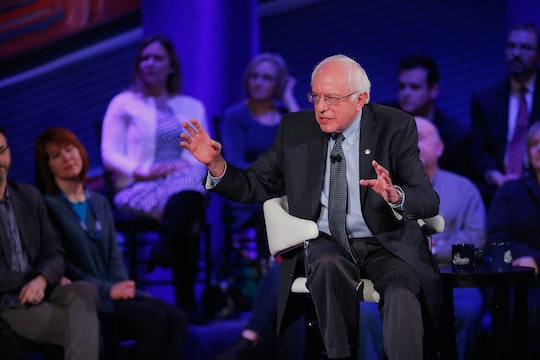 With a week before the Iowa caucuses, the pressure is on for what's shaping up to be a tight race between Sen. Bernie Sanders and Former Secretary of State Hillary Clinton for the Democratic nomination. Tonight's Democratic Town Hall held in Drake University in Des Moines, IA. gives the two a chance to go head-to-head on the issues. Then, the question with a week to go until the crucial Iowa caucuses becomes, what are the issues? And, more importantly, what questions does Twitter want answered?

A quick scan of the social media platform revealed at least some of what people wanted answered during Monday's discussion. There were several hot-button issues that the American electorate wanted the three Democratic candidates to answer during the CNN-aired town hall, with five in particular standing out from the rest.

Many of them came as no surprise. After all, these were the issues that have been making headlines. But the town hall was gave the nation's top Democratic voices — the people who have made it this far in the race to the Oval Office — a chance to offer remarks which elucidated their views on issues that meant something to the Democratic party. So what was Twitter itching to discuss the most?

Where do each of the candidates stand on issues of immigration? Whoever wins the Democratic nod is likely going to face some tough opposition on immigration from the Republicans. Going into the town hall much of Twitter was waiting to see which candidate would make an argument that could defeat the GOP when it came to immigration laws.

On Monday night, Clinton did touch on the issue, referring to GOP front-runner Donald Trump's immigration stances "not only shameful and contrary to our values", but dangerous as well.

Sanders and Clinton have different stances on gun control reform, and the Democratic Town Hall heard the two sound off on what role the federal government should have in regulating firearms and all laws surrounding guns.

Sanders in particular stole the opportunity on Monday night to suggest that, if given the opportunity to do so, he'd reconsider support of a 2005 gun liability law on which he had previously voted no.

Although President Obama made great strides to bring attention to the fact that people need to start taking care of the planet, especially with the success of the Paris Climate Change Conference of 2015, there's lots of work to be done. The next president will need to pick up where Obama left off.

On Monday night, Clinton and Sanders did indeed spar over the topic, with Sanders suggesting that Clinton wasn't serious about combatting the trend.

Many workers are concerned about the lack of paid sick leave in the U.S. There's currently no federal mandate that advocates for paid family leave either, which is another issue that's on the minds of many Americans.

With abortion still a hot topic and Planned Parenthood under attack by Congress in late 2015, reproductive rights (or as I like to call them, Civil Rights) remain important to Democrats. At Monday's town hall, however, the topic was not directly addressed.

As important as these issues are, voters are also thinking hard about which candidate can help make the transition from President Obama's administration as seamless as possible, while moving forward the ideals of the Democratic party. For now, it seems that a few of the electorate's biggest questions remain unanswered.