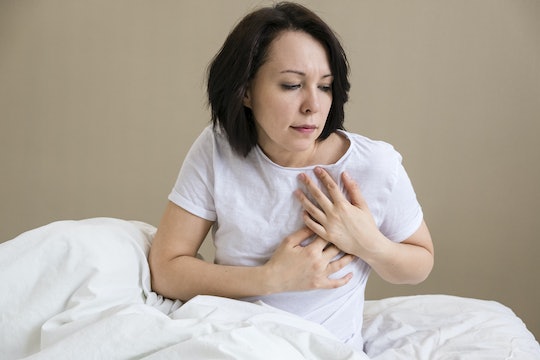 Whether you're trying to get pregnant or definitely, definitely not trying to get pregnant, there are certain telltale signs that can either give you hope when they show up or send you into a panic. But are they actually harbingers of pregnancy (this time), or is whatever you're feeling a symptom of another condition (or nothing at all)? There are several early pregnancy signs that could be something else entirely. So how can you tell the difference?

Making things even more confusing is the fact that early pregnancy can look an awful lot like PMS (and those symptoms tend to show up right around the time you'd be expecting your period). Hence the all-too-common experience of being completely let down when whatever your symptoms are turn out to be part of a particularly intense period... or the result of eating some questionable leftovers or even an undiagnosed, unrelated medical condition.

Generally, if these symptoms aren't caused by a pregnancy, they're still nothing to worry about. (Okay, in some cases they're cause for concern, but usually not.) And don't get hung up on looking for "traditional" symptoms only, either. The funny thing is, certain signs that you're expecting — like a cold that just won't quit — might go completely unnoticed because you don't typically associate them with being preggers. The human body is full of surprises, sigh.

So if you're dealing with any of the following issues, don't necessarily assume you've got a new addition on the way. (But don't assume you don't, either.)

More Like This
Are You Leaking Amniotic Fluid Or Is It Normal Discharge? Experts Explain
New Report Shows 80% Of Pregnancy-Related Deaths Are Preventable
How To Increase Your Sex Drive While Pregnant
What Does Amniotic Fluid Smell Like? A Nurse Explains