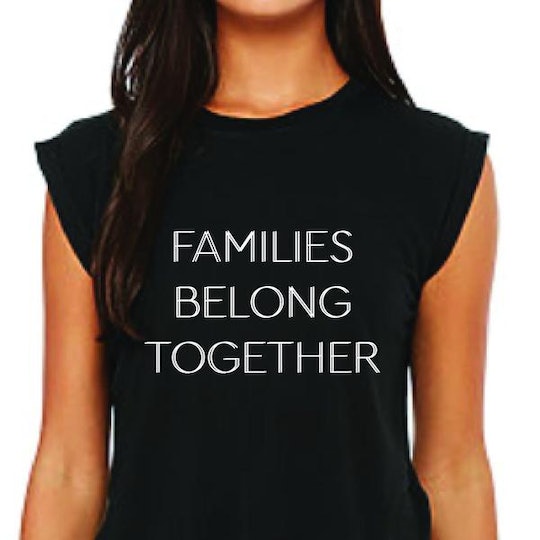 Courtesy of The Outrage

During the past month or so, one pressing national topic has overshadowed the rest: The Trump administration's zero-tolerance policy on prosecuting people who illegally cross the U.S.-Mexico border — and the subsequent practice of separating children from their parents. Public outcry about the inhumanity of such a policy has been rampant. The United Nations has publicly condemned the practice, as well as countless world and church leaders. While the Trump administration and its supporters have defended separating families at the border — and even attempted to re-define the term "cage" in the process — various organizations have been planning a large-scale protest for June 30. In preparation for the marches this weekend, here are five "Families Belong Together" t-shirts that give back to organizations working to support that mantra.

This Saturday, June 30, protesters from around the country will gather for the Families Belong Together march. Although the largest event is set to take place in Washington, D.C., there will actually be marches held in all 50 states, Puerto Rico, and several other countries, according to the listing on the event's website. In preparation for the event, plenty of march-goers are probably planning on making signs and/or wearing clothing to show their support. While you could certainly make your own T-shirt to wear to the march, another option is to buy one online that sends proceeds to organizations helping to keep immigrant families together. Because then, it's like doubly supporting the cause. With this in mind, here are five options for you consider.

1. This Black Tee That Supports RAICES

This classy T-shirt is $32 and it benefits the Refugee and Immigrant Center for Education and Legal Services, otherwise known as RAICES. The product description reads, "Families. Belong. Together. Period. We demand the Trump administration stops tearing families apart." If you're not familiar with RAICES, it's a nonprofit that provides free and low-cost legal services to immigrant families in Texas, NPR reported.

2. This White Tank From The Families Belong Together March

This shirt will set you back $25.49 (plus shipping.) There are sizing options for women, men, and children in a variety of colors. Even better? All of the money goes to the Families Belong Together organization itself.

3. This Maroon T-Shirt Also From The Official Merch Store

The T-shirt version of the aforementioned tank has the same logo on it, but the "Families Belong Together" and "Familias Unidas No Divididas" are in a slightly different configuration. (It's also only $23.49, plus shipping.) Here's another great option that benefits immigrant families, and it'll keep you looking sharp both during and after the march this weekend.

4. This Other Black "Families Belong Together" T-Shirt

Like the first black T-shirt listed, this option is $32 and is also sold by The Outrage, which is the official pop-up for the Families Belong Together march. (So again, it benefits RAICES.) However, this unisex T-shirt is cut a bit differently — plus the writing on it stands out a bit more. Instead of white lettering, "Families Belong Together" is written in vibrant blue, yellow, and red.

5. This "Of Course I F*cking Care" Jacket

Okay, so this isn't technically a shirt. But it's pretty on-par as far as the June 30 march is concerned. (Although I'd take a look at the weather forecast and keep that in mind before buying it just for the protest; it's going to be a hot weekend in much of the nation.) The Outrage offers a spin on the controversial jacket worn by Melania Trump on June 21, when she made a trip to the U.S.-Mexico border, People reported. Except, hers said "I Really Don’t Care, Do U?" A fair heads-up, though: This cheeky jacket is $65. (Totally worth it, though, in my opinion.)

In spite of the fact that Trump signed an executive order to end family separation and that a federal judge in California ordered the end of child-parent separations with specific stipulations, there still remains approximately 2,300 immigrant children who are currently being kept from their caregivers in detention centers, Vogue reported. They will remain under the care of the U.S. Department of Health and Human Services' Office of Refugee Resettlement, with no timeline for reunification, according to the publication. These children are being housed inside cages at detention centers, with foil thermal wraps as blankets. The time to act is now — and supporting organizations that do so by purchasing "Families Belong Together" gear is one small way all of us can help.