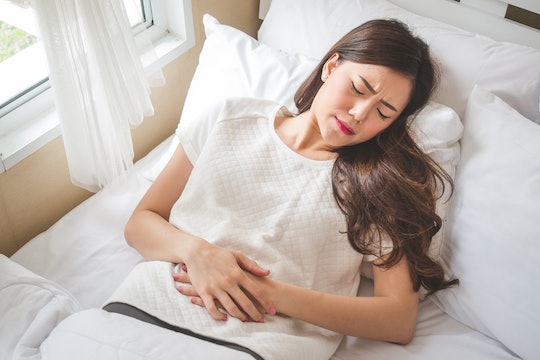 5 Fascinating Things That Happen To Your Brain During Your Period

Cramps and bleeding aren't the only signs of a period. The brain gets involved, too. As a matter of fact, many fascinating things happen to your brain during your period. Menstruation just has far-reaching effects like that.

That said, the degree to which menstruation affects the brain will depend on the individual. "This is a complex topic and it varies from woman to woman," says Dr. Richard Honaker, Chief Medical Officer of Your Doctors Online. Three hormones (estrogen, progesterone, and testosterone) affect areas of the brain such as the hippocampus, amygdala, and hypothalamus, as Dr. Honaker further explains. This means everything from your memory to your stress level can be affected by the menstrual cycle in some very real ways. Again, it's a complicated interaction that will effect everyone in a little differently.

For many people with periods, though, it may be reassuring to know that there are definite reasons your brain feels foggy whenever it's that time of the month. You aren't imagining things. It's just that there's a delicate interaction of hormones going on, and sometimes those changes go on in your brain as well. Here's some specific symptoms you might be able to blame on "period brain" now, because it's a real thing.

More Like This
Baby Growth Spurts: When They Happen & What To Expect
Pelvic Pain During Pregnancy: What Causes It & How To Deal With It
Here’s Why Your Vagina Itches At Night, According To Experts
An Honest Review Of The Nixit Menstrual Disc