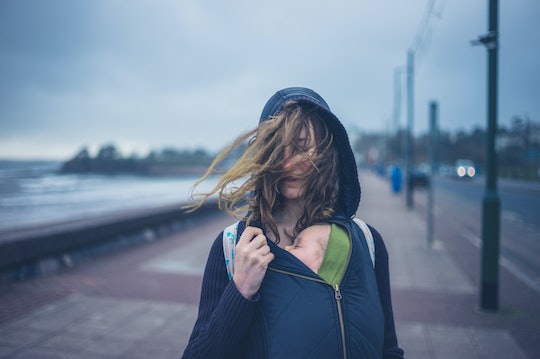 5 Fears Every Mom With PPD Has

The hardest part of having my first child wasn't the pregnancy, labor, or delivery. It wasn't the early days of struggling to find my footing as mother. It wasn't with each breastfeeding "failure" or dealing with my daughter's jaundice and colic. For me, it was the moment I was diagnosed with postpartum depression (PPD) and only then, in retrospect, could I see all I'd become. Paranoid, depressed, angry, and lacking sleep an aggravate some of the fears every mom suffering from PPD has, and they certainly fed my worries with reckless abandon. Before I knew it, I was forced into a deep hole I just couldn't crawl out of on my own.

More Like This
Here's The Deal With Babies Who Sleep With Their Eyes Half Open
Um, "Rusty Pipe Syndrome" Is A Thing, & Every Breastfeeding Mom Should Know About It
I've Missed You So Much! You Still Can't Touch The Baby.
Experts Offer Tips On How To Wean — Whenever You’re Ready

PPD is a monster. It eats away at the person you once were until you're unrecognizable, even to yourself. Those were scary times because, as it was happening, I wasn't aware of the changes. I knew I felt dark, that getting out of bed had become a chore, and crying was supposed to be part of the hormones shifting back into their correct places. It wasn't until things got too dark, when I didn't get out of bed at all, and when the hormones didn't settle back into "normal," did I start to wonder if something was wrong with me. Somehow, thoughts of suicide slowly crept into the corners of my brain. They became regular visitors who tried to convince me my new baby, and my partner, would have better lives without me. It all felt normal within me. I didn't pause to question the thoughts, nor did I necessarily fight them.

My entire life has been one metal health battle after another. From early childhood anxiety and depression, to my adulthood where I was officially diagnosed with Obsessive Compulsive Disorder (OCD), Generalized Anxiety Disorder, (GAD) and Post Traumatic Stress Disorder (PTSD). Unfortunately, when I'm in the thick of it, I don't. It all starts to feel very normal and that's probably the scariest part. These disorders also overlap and have similar symptoms, so when my doctor revealed I had PPD, although relieved to know the feelings weren't just in my head, I wasn't surprised.

Having PPD, for me, meant not knowing how I'd deal with a typical day as a new mother. Would I be the person my daughter needed, or would I cower? Out of everything I've ever gone though, the one thing I knew I couldn't do was anything that might put my daughter in danger. I got all the help I needed, including medication, therapy, and support from family and friends, but even after I came out of the PPD hole I felt the stigma following me. Yes, I had PPD, but I was doing everything I could to combat the dangerous disorder so that I could be the mother my daughter needed me to be, and the woman I needed me to be.

The long days and nights I suffered with PPD, my fears were abundant. Part of having the depression meant knowing I wasn't in control and if I wasn't, who (or what) was? My baby needed me, but I was lost inside of myself in an endless maze with no exit.