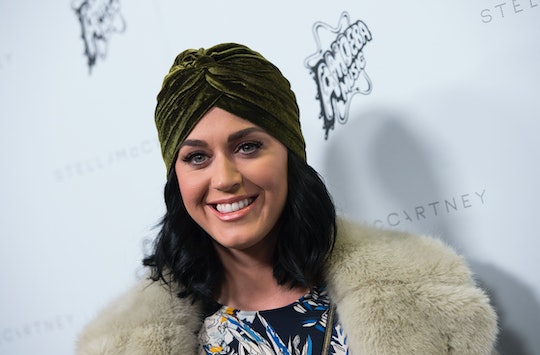 The internet is not lacking in conspiracy theories. Just start searching and you'll find yourself going down an endless rabbit hole of speculation. No matter your interests, there's a conspiracy theory for you: Jar Jar Binks really was in the new Star Wars movie; Beyoncé never really was pregnant; there's not only water on Mars — there are people; Facebook is an elaborate tool to opiate the masses; Tupac is alive; Elvis is alive. The latest theory to get internet sleuths excited is an odd one: the child pageant-winner JonBenét Ramsey was not really murdered in 1996. In fact, she's alive and grew up to be the pop singer Katy Perry. Skeptical? That's fine. That's what makes a good conspiracy theory — it's just far-fetched enough. To save you from having to trawl for clues yourself, here are the top five Katy Perry-JonBenet Ramsey conspiracy theories collected from the wide world of the web.

The conspiracy theorist who started this all is Dave Johnson who posted a seven-minute video that summarizes his evidence to YouTube in 2014. Lately, that video has resurfaced. It lays out the "facts" that support his theory, many of which rely pretty heavily on suspending disbelief and squinting at old photographs. Here is the body of evidence put forth by the community of conspiracists.

This bit of evidence is perhaps the most obvious. Side by side photos do reveal some resemblance. Johnson's video touches on this, and even includes some "sophisticated" fade-effects that the filmmaker claims proves, unequivocally, that Ramsey and Perry are indeed the same person. They do look alike, but there is a fundamental problem with this point. Perry was born in 1984, so some quick math will reveal that she would have been 12-years-old in 1996 when Ramsey died. Ramsey was six then. Conspiracists may say that Perry is lying about her age to conceal the truth (and she wouldn't be the first person), but this does undercut the conspiracy a bit.

Ramsey's Murder Was A Hoax

Since Dave Johnson posted his video in 2014, it's gotten over 80,000 views. It lays the foundation for this theory, which hinges on the filmmaker's main point that Ramsey's murder never happened. He claims that Ramsey's parents, aka Perry's parents, staged their daughter's death so that she could be reborn "a star." Johnson doesn't go into much detail about the reasoning or motivation for this trick, other than it was "masonic play." He does spend a good deal of time accusing those who believed in the murder to be "false witnesses" because this theory, he claims, is not a theory at all, but "a fact."

Johnson's video overlays images of Ramsey's parents and Perry's parents in order to prove that the main players here, the parents, are indeed the same. They do look quite different, but he claims that Perry's dad just shaved his head, and her mom lost some weight. Their faces, though, have remained the same.

Perry & Ramsey Have The Same Eyebrows

You may be thinking, didn't we go over this in the resemblance section? Yes, we did. This video, however, is one of the most popular arguments in this Perry-Ramsey theory. YouTuber Jungle Surfer's main point lies in the eyebrows. This evidence, he claims, is "the big one." He says, "You know, the eyebrows don’t change much on a person. You’re born with your eyebrows." He measures them and lines the up. He also expresses his general distrust of the entertainment world: "As you know, this whole entertainment industry is just a charade -- you really don’t know the truth."

Perry Allegedly Hints That She Is Ramsey In Her Memoir

"Hints" may be a strong word. YouTuber VK 33 draws attention to a line in Perry's memoir, which, in his opinion, confirms his suspicions.

A biography about Perry mentions an interview she did where she discussed writing songs as a child, but it doesn't say during what interview she had the discussion, according to the Huffington Post. The biographer alleges that Perry said: "Not that I was one of those stage kids. There was no JonBenét Ramsey inside of me waiting to burst out." He claims that her mentioning Ramsey is enough to corroborate the theory. Plus, this is just one of many "hidden clues in plain sight."

These are only a select few theories about this case of hidden identity. Believe it or not, there are many, many more. Like any conspiracy, the longer you think about it, the more believable it becomes.