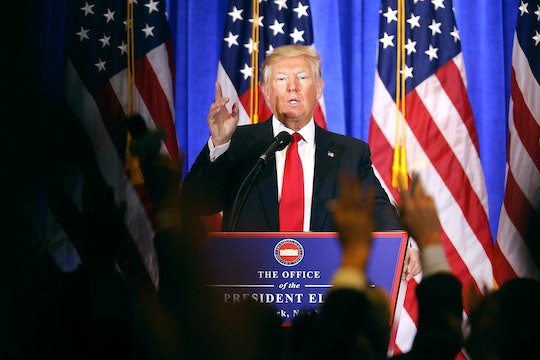 On Wednesday, President-elect Donald J. Trump gave his first press conference since winning the Republican presidential nomination in July of last year. In the highly-anticipated conference, Trump spoke briefly before taking un-fielded questions from reporters gathered at Trump Tower in Manhattan. Though Trump's prepared remarks were brief and his answers to reporters somewhat rambling, it's obvious that Trump invents his own reality at every moment. Of all the lies Trump told during his press conference, some were more egregious than others. Trump's transition team did not immediately return Romper's request for comment.

Wednesday's press conference was previously scheduled to focus on how Trump plans to eliminate conflicts of interest between his many businesses and his forthcoming role as the 45th President of the United States. However, as the president-elect was preceded by incoming white House Press Secretary Sean Spicer and then introduced by his Vice-president-elect Mike Pence, it was clear that Trump would have to address shocking allegations of Trump's ties to Russia released late Tuesday night in an unverified intelligence report obtained by BuzzFeed News and reported on by CNN. Even as Trump staunchly denied the veracity of the report, he was still more than happy to lob out plenty of untruths of his own. Here are the five worst lies Trump told during his press conference.

1. Great Respect For The News

Early on in Trump's prepared remarks, he said, "I have great respect for the news and great respect for freedom of the press and all of that." I just about did a spit take when he said that. I can't believe he said this just two days after Trump's mocking of a disabled reporter in 2015 was back in the news again. Actress Meryl Streep called out Trump's behavior in her Golden Globes speech on Sunday. Yes, nothing says "great respect for the press" like making fun of a reporter with a disability at one of your campaign rallies. And no, no matter how many times he denies it, video of the incident won't disappear.

When asked by a reporter about a claim in the report that Russian President Vladimir Putin was personally involved in Trump's win, Trump went on a random tangent about how Putin likes him oh and by the way Obama founded ISIS:

Russia can help us fight ISIS, which, by the way, is, number one, tricky. I mean if you look, this administration created ISIS by leaving at the wrong time. The void was created, ISIS was formed.

Um, no. ISIS was founded by Abu Musab al-Zarqawi. And that void Trump mentioned? That was formed by George W. Bush's invasion of Iraq in 2003 when destabilization in the country after U.S. intervention allowed ISIS to gain a foothold in the region.

3. No Dealings With Russia

Trump evaded a question by a reporter asking him to "categorically deny" that he or any member of his staff had contact with Russia during the presidential campaign. However, Trump did very adamantly say this in response to questions about his alleged business dealings with Russia:

Huh, that's odd. Donald Trump Jr. spoke at a real estate conference in 2008 and reportedly said quite the opposite: "Russians make up a pretty disproportionate cross-section of a lot of our assets. We see a lot of money pouring in from Russia," according to TIME. Weird. So, which is it Trump?

At Trump's press conference, the president-elect outlines some pretty ambitious plans to not only repeal the Affordable Care Act, but replace it with something even better — the very same day it's repealed. Hahaha, no pressure Paul Ryan, am I right? Speaking about the ACA, Trump said, "Obamacare is a complete and total disaster ... It’s imploding..." Huh, that's interesting, despite the fact that an additional 20 million Americans have health insurance thanks to the ACA or that there was a $10.5 billion reduction in uncompensated care costs last year — money that hospitals must shell out when treating patients without health insurance — again, thanks to the ACA.

5. Nobody Cares About Trump's Tax Returns

Trump was again asked about his tax returns, and he once again reiterated that he wouldn't release them because he's under audit. But then Trump went on to say that the only people that care about his tax returns are the media and that "No, I don’t think they [the American people] care at all. I don't think they care at all." In a Pew Research Center poll released Tuesday — literally 24 hours before Trump's first press conference in 167 days — 60 percent of Americans say that Trump has a responsibility to release his tax returns.

These statements by Trump at his first press conference as president-elect were certainly the most outrageous of his outright factual lies. But like so many of Trump's speeches, his remarks were littered with lots of "wonderful" "tremendous" "incredible" superlatives that added generous padding to opinions he tried to pass off as truths, such as this rather confident gem: "I will be the greatest job president God has ever created."