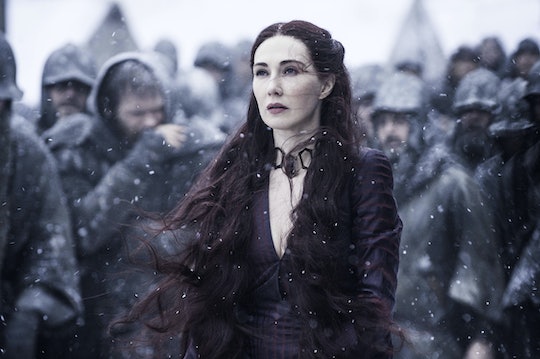 5 Melisandre Theories On 'Game Of Thrones' That Are Worth Investigating

In the premiere episode of Game of Thrones' sixth season, titled "The Red Woman," it was revealed that Red priestess Melisandre is keeping some serious secrets. It turns out her appearance is actually a glamour of some kind hiding her true form, which is a great deal older than how she has presented herself thus far. That throws a lot of new questions into the air. Is everything about her a lie? Is Melisandre her real name? Is she someone else altogether, or is she simply a lot older than she looks? A lot of Melisandre theories on Game of Thrones have come to the forefront, and they're worth investigating.

If the premiere proved anything, it's that there's a whole lot fans don't know about Mel. It's not just questions of appearance and identity; seeing her confidence and faith shaken after Stannis' death brought a new depth to the character. Now that she's confounded audience expectations, there's no telling what else she might do going forward (though viewers can guess). We may not have much concrete information about her, but that can't stop the speculation. Here's a rundown of several theories about Melisandre – the old and the new, the realistic and the absurd.

Hints have been dropped about Melisandre's surprisingly advanced age both in the show and the books, but until the necklace reveal there had been speculation that she was in fact one of the undead that populate the Game of Thrones universe. That would allow her to live for years without aging, and would also tie into her R'hllor-sponsored powers. User DarthGregor on Reddit pointed out that in addition to her apparent timelessness, Melisandre doesn't need to eat or sleep – another characteristic shared with characters brought back to life.

Some people felt the positioning of the Melisandre reveal and the reference to the prophecy haunting Cersei in the same episode might have been a hint that Melisandre is actually the witch who told it to Cersei – which could work now that we know just how old Mel is. It's a long shot, but who knows?

3. Her Necklace Might Be Very Powerful On Its Own — Or Not

Melisandre's necklace seems to be involved in some way in her transformation because it was the last thing she took off before it happened. However, some fans have pointed out that she has been without it in the past and retained her youthful form. Because of that, theories have been raging about Melisandre's necklace: either it's extremely powerful, or it's not doing much. That bath scene is a problem; perhaps the necklace isn't as strong as we think, and Melisandre needs addition items (perhaps potions, seen both in the bath scene and on her table in "The Red Woman") to maintain her youth.

Other fans are wondering if the necklace is actually capable of a huge amount of magic. It has glowed on several occasions, and also seemingly protected Melisandre from poison. Perhaps the necklace, or the glowing stone in it, could even have the power to bring someone back to life.

The scene that has been tripping fans up – in which Melisandre takes a bath without her necklace on – has spawned its own theory to explain away the inconsistency. The only person in the scene with her was Selyse so some fans are wondering if perhaps Selyse was seeing Mel's true form the entire time and the audience was still seeing the lie.

As explained by Reddit user brashendeavors: "Selyse has this strange expression the entire time. Like she cannot look directly at Melisandre yet also cannot look away. At first you think it is that of a religious 'uptight' person seeing a naked and very sexual woman. But if you rewatch the scene, and 'pretend' to yourself that Selyse is seeing Melisandre as she actually appears, it actually fits better. WE still see the seductress, Selyse sees the hag."

It's unlikely (the scene is played pretty straight on the show), but it definitely adds another, fascinating layer to the story.

5. Melisandre Is A Targaryen

Who isn't these days? One of the hugest theories of the Game of Thrones universe involves Jon Snow's real parents, but it turns out he might not be the only one unexpected lineage. One repeated prophecy in the books concerns a warrior named Azor Ahai, who, "when the red star bleeds and darkness gathers," will be born again to do some cool mystical warrior stuff. The part that deals most directly with Melisandre is the "red star"; some fans are wondering if that refers to her, and if she will "bleed" to bring Jon Snow (a.k.a. Azor Ahai) back to life.

The most obvious hint that the red star is Melisandre is her penchant for all-red ensembles, but it does go deeper than that. She might be the child of two of Aegon IV Targaryen's bastard children, Shiera Seastar and Bloodraven (soon to be introduced as Bran's Yoda). Descriptions of Shiera and Melisandre imply they look alike, but the problem has always been that Melisandre would have to be well over a hundred years old to be Shiera's daughter – and it was just confirmed that she is.

Whatever the truth about Melisandre and her powers, it seems like a guarantee that she's going to do something big this season.