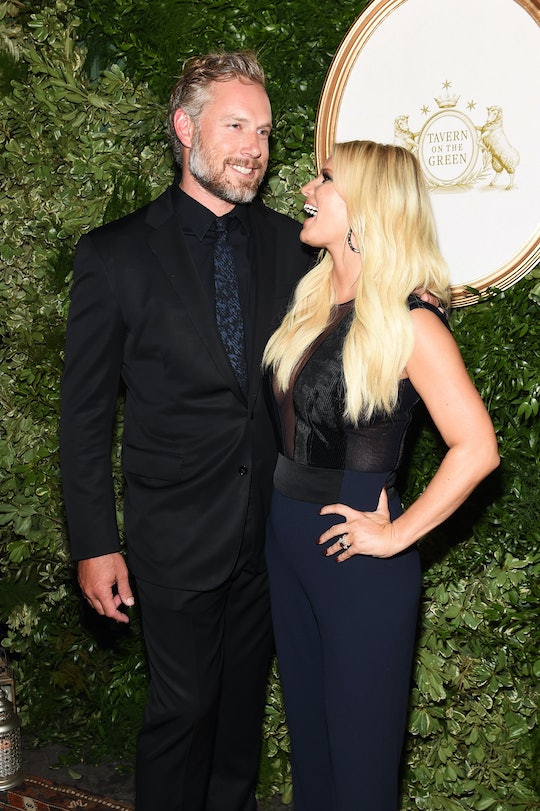 You can always count on Jessica Simpson to tell it like it is when it comes to parenting. Whether she's dishing on TMI details about her pregnant sex life, sharing photos of her family's kinda-sorta-not-really themed Halloween costumes, or just posting relatable anecdotes about everyday life with kids, Simpson and her husband have too many epic parenting moments to count. (Did I mention they're also #couplegoals?) Let's go ahead and take a look at five of Jessica Simpson and Eric Johnson's most relatable parenting moments. Because these two may be celebrities, but deep down they're just like us.

In case you haven't kept up with Simpson in recent years, she and her former NFL player husband recently welcomed their third child. As E! Online reported, the couple added a baby girl named Birdie to their family in March. They also have a daughter, Maxwell, 6, and a son, Ace, 5. I'd imagine things in their household are probably pretty busy at the moment with a newborn, which is likely why Simpson hasn't been posting on social media nearly as often. However, a quick look at her Instagram account shows just how relatable Simpson and Johnson are as both parents and a couple.

1. She think's her husband is a DILF.

In April, Simpson shared a photo of her husband wearing a suit and sunglasses while holding an infant car seat. She captioned the Instagram post with, "Hot Dad Alert 🚨." You have to admit — Johnson does look rather dapper in this picture. But there's just something about the fact that he's doing the dad thing that makes it extra attractive. "He keeps me hot, I have to say," Simpson told ET Online in July 2018. "He's always throwing around the kids, and he's just an amazing father, it makes me want to stay young. Like how can you be so active? I mean watching the kids running makes me exhausted."

In October 2017, Simpson shared a photo of her family dressed up in their Halloween costumes. Johnson was Waylon Jennings and Simpson was Willie Nelson, beard and all, In Style reported. Sure, they didn't quite get everyone in on the country music singer theme — considering Max and Ace were Belle from Beauty and the Beast and a cowboy, respectively. But the near-coordination of it all is relatable AF. Because honestly, a completely on-theme Halloween costume set is overrated.

3. She low-key shames him via social media.

Apparently, Simpson has no problems throwing some shade at her husband for allowing their daughter to give herself a haircut. In September 2016, Simpson shared a photo of herself holding a sandwich bag with blonde hair clippings in it. "Maxwell found Daddy's scissors 9/6/16," she wrote with permanent marker on the bag. "Just in time for school... #MOMMYISNOTHAPPY." LOL. Honestly, I would have done the same.

Simpson regularly shares photos of herself and Johnson via Instagram, and I'm just going to say it: They're both extremely attractive human beings. But instead of only posting couple pics of them all glammed up, Simpson shares "normal" shots of them as well. Like the above photo of Simpson "holding up" the moon with her hand while the pair makes cheesy faces. "Full Moon Nerd Alert 🌕 🤓," she captioned the Instagram post.

5. They're both so proud of their kiddos.

In March, Simpson shared a cute selfie with her husband both wearing green and yellow ball caps they said, "A's" on the bill in the photo. She captioned it with, "Ace hit a homerun!!!" Awww. Clearly, they were so excited for their little slugger — they couldn't help but share his accomplishment via social media. Sounds familiar to me.

See? Jessica Simpson and Eric Johnson really are just like us. And now that they've added a another baby girl to their family, I'm willing to bet their parenting/couple journey will be even more entertaining to watch from afar. Please don't ever change, you two!