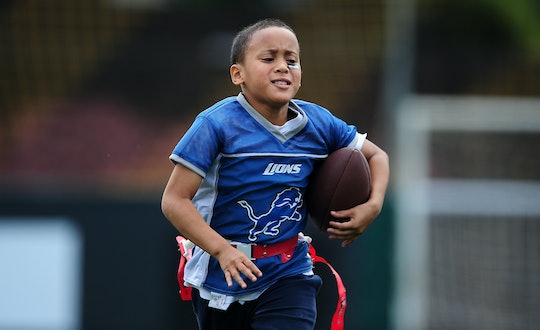 5 Of The Most Risky Sports For Kids

Playing sports is beneficial to kids in so many ways: It keeps them active, it teaches them important lessons about teamwork and accomplishing goals, it builds friendships, and it instills a mental toughness that's crucial to success well beyond the field or court. But, like all things in life, participating in competitive sports comes with inherent risks that certainly merit specific safety considerations. In no particular order, here are four of the most dangerous sports for kids.

Of course, the fact that sports can pose a threat of injury to young players should not deter parents from enrolling them. Rather, knowing which are among the ones that lead to the most harm can help families make informed decisions and start understanding strategies to stay safe. Those can range from making sure kids are hydrated and have proper gear to allowing them to sit out if they feel tired or sick to ensuring that coaches know both first aid and CPR in case of emergency, according to Reader's Digest.

Different precautions apply to different sports, so parents should talk to experts and do their own research depending on which sports their children decide on. Still, here's a list of sports that could potentially pose more problems than others.

According to GreatSchools.org, 389,000 young football players between the ages of 5 and 14 are treated for musculoskeletal injuries each year. The very real possibility of sustaining an injury that could lead to a concussion in this contact sport is also a reason that it's considered especially dangerous. And The Atlantic reported that even among those 8- to 13-year-olds who don't show signs of concussions present evidence of traumatic brain injuries as a result of playing.

Where there is a football game going on — no matter the age of the players — there is more than likely a cheerleading squad or two on the sidelines. But according to the American Grandparents Association, this is the most risky sport for kids, surpassing even football. In fact, cheerleaders are 18 times more likely get hurt than football players, the association reported. They frequently injure their wrists, shoulders, ankles, and backs.

According to NerdWallet, USA Hockey permits kids to "check" their opponents starting when they are just 11 years old. The practice of checking is basically a full-body slam to defensively block the player with the puck, and it can result in real injuries that often land players in the hospital. "Boys who play ice hockey in leagues that allow body checking are two to three times more the likely to suffer serious injuries and concussions compared to boys in non-checking programs," a study from the American Academy of Pediatrics found.

A 2012 Loyola University study named basketball the most dangerous sport for kids, reporting that the sport had sent more than 500,000 players to the hospital with injuries in just one year. A common injury is damage to the ACL. And high school basketball coach David Hess told ABC News that other frequent injuries on the court include torn ligaments, jammed fingers and knee injuries. "I would say ankle [injuries] occur most in basketball [due to] contact with a lot of jumping," he siad.

In 2016, The Los Angeles Times reported that soccer had been increasing in popularity in recent years — and the numbers of injuries that kids sustain while playing had risen, too. More than 3 million young soccer players ended up in the emergency room between 1990 an 2014. Injuries sustained during play often include strains and sprains, fractures, soft-tissue injuries, and even concussions. Concussion-related injuries often stem from the practice of heading the ball, so the U.S. Soccer Federation now recommends that kids who are 10 years old or younger avoid it until they're a bit older. It also warns that 11- to 13-year-olds should do so only sparingly.

Of course, the information in this list is not comprehensive, and it (alone) should not deter parents from exploring the possibility of signing kids up to play. Instead, they should gather as much information as possible on the pros and cons of all sports available to kids and make decisions accordingly.