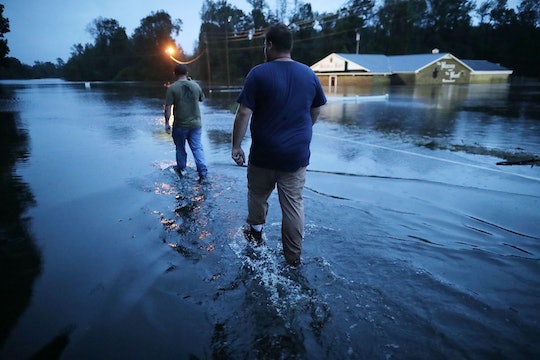 5 Organizations To Donate To After Hurricane Florence Battered The Carolinas

Over the weekend, Hurricane Florence ripped through North Carolina and South Carolina. At least 16 people have died so far, according to The New York Times, and hundreds of thousands of people still do not have power. As the hurricane continues to travel through the area, many might be wondering how they can help. If you are, here are five organizations to donate to that are helping Hurricane Florence victims.

Hurricane Florence first hit North Carolina on Friday morning, with 90 mph winds and heavy rain, NBC News reported. The storm continued to travel across the state and into South Carolina, and many areas of both states are still flooded, according to CBS News. Among the reported 16 people who the hurricane tragically killed is a mother and her 8-year-old infant, as reported by NBC News. After a tree fell on their home, the family of three was trapped. First responders were able to free the dad, but sadly, the mom and baby did not make it.

Before the storm hit, officials advised residents living along the coast to evacuate to a safer area, as The Independent reported. However, many residents stayed in their homes, for a variety of reasons. One North Carolina resident told the newspaper he was staying in hopes that God would protect him, while another said he decided to stay to protect his six dogs and his possessions.

But most likely, the majority of the people who remained in the Carolinas did not do so by choice. People including those who do not have adequate financial resources, those who are disabled, immigrants, single parents, and the elderly may not have had the option of evacuating, as Scientific American explained.

That being said, roads are still flooded, and about 740,000 homes and offices do not have power, as NBC News reported. That means that many people are still in need of help evacuating. Here are five organizations working to help Hurricane Florence victims that you can donate to.

Anthony Tornetta, a spokesperson for the American Red Cross, told NBC News that the easiest thing people can do to help is donate money to the Red Cross. “After a big disaster, the Red Cross spends an average of 91 cents of each dollar to help people in need. This includes shelter, food, relief items, health and emotional support, and financial assistance, as well as logistics and support," he told NBC News, adding that the remaining 9 percent goes to running the organization.

The Red Cross is also in need of blood donations for Hurricane Florence victims, which is a great option if you cannot afford to donate money.

When Hurricane Harvey hit Texas last year, one victim was a bulldog named Frank. His human, David, founded a charity called Frank's Nation in Frank's memory. The group set up a GoFundMe page to raise money for disaster relief efforts in the wake of Hurricane Florence's destruction.

Animal lovers, here's another opportunity for you to help the animals affected by the hurricane. The Atlanta Humane Society, located a several-hour drive from the Carolinas, has rescued dozens of animals who were displaced in the storm, The New York Times reported. All donations made through the Atlanta Humane Society's website are being doubled through the end of the month.

Nonprofit Save the Children is working to help families and children affected by Hurricane Florence, who are in need of things like diapers, wipes, etc, according to The New York Times. On Save the Children's website, you can make a donation directly to the Hurricane Florence Children’s Relief Fund. As noted on the site, 10 percent of donations go to the organization's Children's Emergency Fund, a reserve account for emergencies.

To make things easy, you can donate $25 by texting HURRICANE to 20222, according to Save the Children's Twitter.

5. All Hands and Hearts

All Hands and Hearts, a disaster relief organization, is raising money to get responders on the ground, as well as other methods of assisting with disaster recovery, according to Vox.

It's so devastating to read about Hurricane Florence's disastrous effects. Hopefully enough donations will come in to help those who are in need.

More Like This
Firefly Lane Is Coming Back To Netflix For One More Final Season
10 Horror Movies With Creepy Kids That Will Scare The $#*% Out Of You
The Complicated Targaryen Family Tree From House of the Dragon Explained
Exclusive: Your Favorite Yeti Is Back With More Adventures In New 'Abominable' Series