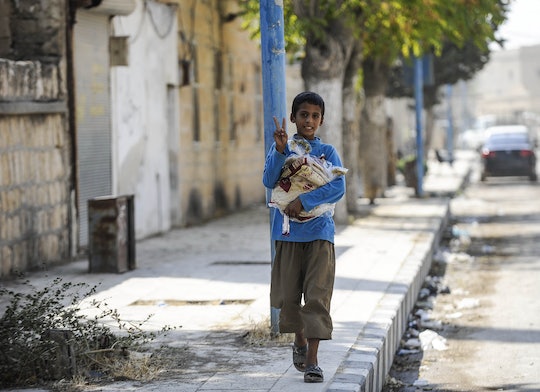 The United States launched air strikes in Syria with the intention of attacking the regime of Bashar al-Assad last week after civilians — many of which were children — were victims of a chemical gas attack. The release of sarin gas, a biological warfare agent, killed more than 80 people, according to The Guardian. Many victims who required medical treatment had to be taken to hospitals in Turkey, as Syria is desperately lacking proper medical facilities. The warfare in Syria has been taking its toll on the country's people — children, in particular. Here are five organizations helping Syrian kids that you can support with your time, money, or other resources.

According to UNICEF, 2016 was the worst year yet for Syria's children: deaths rose by 20 percent, and injuries by 25 percent. The children who have survived are experiencing unprecedented violence and trauma, and more than 6 million Syrian children rely on humanitarian aid, according to NPR. While hundreds have been recruited to be used as child soldiers, civilian children face the prospect of having their families, homes, chances for an education, health, and safety torn from them at any moment. Some children are experiencing levels of trauma so severe that psychologists, social workers, and physicians have started referring to it as "toxic stress," according to The Guardian. With the right interventions and support, however, experts hope that these children can survive and recover.

Aside from organizations like UNICEF, there are many organizations based in the U.S. and abroad that are focused on providing aid to Syria, particularly where children are concerned. Whether you donate time, money, resources, or support their social media endeavors, every little bit helps. For a country in such a time of crisis as Syria, individual help may feel like a drop in the bucket — but all that help adds up and has the potential to affect real change.

Established in 1994, this charity has locations throughout the U.S. and the world, and helps organize relief efforts for children worldwide. It has done clothing drives to help Syrian refugees in the past, and is currently accepting monetary donations via its website. Like many such programs, you can also opt to sponsor a child from a particular country in need, or attend aid-raising events around the world.

Since it became an independent entity in 1993, Islamic Relief USA has been working to help provide aid and support to countries in the Middle East. The U.S.-based charity provides multiple ways for supporters to participate, whether it be engaging through social media campaigns, volunteering on the disaster response team, or donating time, skills, or money to the cause. The organization also provides education, seminars, and other resources, much of which are available online via its website or YouTube channel.

One of the most pressing issues in Syria at the moment is that, in the wake of seemingly never-ending violence, there is not enough medical care in the country to help the victims, many of whom are children. Groups like Medical Teams International, which has been around since 1979, have created specific programs to help those in Aleppo and elsewhere in Syria who are in critical need of medical care. You can donate money to the organization's fundraising efforts, but, if you have a medical or other healthcare background, the organization is also looking for volunteers.

For more than 35 years the American Refugee Committee has been working to help refugees from all over the world. It has been trying to drum up interest in helping Syria's people for decades, and has in recent years redoubled its efforts. It uses monetary donations received from supporters worldwide to help provide food, water, shelter, and hygiene infrastructure to families ravaged by war.

After becoming an independent nonprofit in 1970, OxFam America is one of the longest-running charitable foundations that offers aid to Syria. While you can donate and volunteer to the organization just the same as you can most others, one thing that's especially neat about OxFam is that it tells the stories of its volunteers and the people it provides aid to. It is putting names and faces to the humanitarian efforts in a way that is engaging, motivating, and offers up a little hope in a situation that feels, at times, truly dire and insurmountable.

UNICEF estimates that nearly 8 million children in Syria are in need of immediate aid. Two million of those children have become refugees, and may become separated from their families — if they haven't already. Whether you're engaging with relief organizations online or off, what matters is that you are engaged. The humanitarian crisis in Syria will get worse unless international attention is brought to — and remains focused — on it.