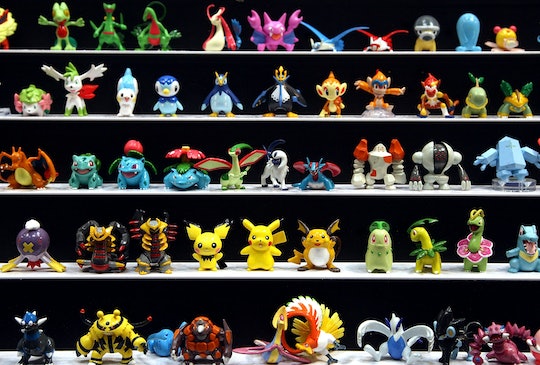 5 Pokemon Go Hacks & Tips, Because You've Got To Catch That Clefairy

Hey, remember when Pokémon was a thing when you were younger? I thought perhaps those adorable cartoon animal hybrids were a thing of the past, like other '90s toy fads such as tamagotchi, pogs, and Furbies. Apparently, I was very, very wrong: Pokémon is back like WHOA — only this time, it has evolved for life in the era of the smartphone. Pokémon Go is the latest app that has millions of users chanting "Gotta catch 'em all!" as they race around their communities to find and catch new Pokémon. And boy howdy, it. Is. Awesome. But successfully playing the rebirth of a childhood classic takes some finesse, so doing your homework on Pokémon Go hacks and tips is a must.

First, a quick primer for those of you still not in the loop: Pokémon Go is an augmented reality game that was released just last week. It's a free game that's been released in the United States, Japan, Australia, and New Zealand. It uses the same principles of GPS tracking of similar GPS games like geocaching or waymarking. What sets Pokémon Go apart from other such GPS games is that it plops virtual Pokémon into your environment for you to "catch" with your phone. It also encourages and rewards you for collaborating with others playing the game, either via battles or discovering new Pokémon locations. With this basic knowledge of the game, here are the Pokémon Go hacks and tips that will make your gaming experience even better.

Watch Where You're Going

This seems like it would be common sense, and yet — before Pokémon Go was even a thing, people were walking into fountains while staring at their phones. It's very easy to become transfixed by your screen as you get ever closer to that Evee you've been hunting for two days, but don't let your Pokémon Go obsession get in the way of basic situational awareness. Seriously: Don't walk out into traffic without taking a second to stop and look up for oncoming cars.

Get An External Battery — Or Two

While the game is really well developed and designed, Pokémon Go is a battery hog of the worst order. Unless you have the app open on your phone, it won't track anything you're doing or alert you to nearby Pokémon. If you've got an egg to hatch, you'd better make sure the app is open as you walk, otherwise the game won't log your steps. Likewise, if you're near a Pokémon, the game won't alert you unless the app is open. As such, Pokémon Go does quite the number on your battery life, so it's wise to purchase an external battery or two so you can use your phone for other things besides Pokémon Go during the day, like, oh, I dunno, make phone calls?

You Can't Fool The Game To Hatch Your Eggs Faster

One of the easier ways to snag some Pokémon is to collect eggs, incubate, and hatch them. Hatching eggs requires the player to walk a certain distance. Much like office FitBit challenge shenanigans, some devious Pokémon trainers have tried to shake their phones to quickly up their step count, hoping they'll be able to hatch their eggs faster. The developers of Pokémon Go are way ahead of you. The game doesn't use your phone's pedometer to track your distance — Pokémon Go uses your GPS to calculate how far you've walked. So hopping on a treadmill won't help you at all either, because Pokémon Go recognizes that you haven't actually traveled any distance.

Turn Off The AR Feature To Make Catching Pokémon Easier

As previously mentioned, Pokémon Go goes through your phone's battery pretty quickly if you leave the app on all the time. This is especially due to the AR — augmented reality — aspect of Pokémon Go. The app uses your phone's camera, then overlays a monster into that view. If you're on the hunt and have your camera open for several minutes while tracking a particular monster, this will kill your battery pretty quickly. Turning off Pokémon Go's AR feature by clicking on the AR slider button in the upper right corner of your screen will help save battery life — and it has the nice bonus of making it easier to catch your Pokémon, too. When AR is turned off, the monster is centered in your screen, making it ridiculously easier to aim your Pokéball and catch your critter.

You Can Rename Your Pokémon

Now this is a fun little hack. Did you know you can rename your Pokémon? It doesn't necessarily make the game any easier, but it does allow you to have some fun and really personalize your Pokémon Go experience. (Or if the name "Squirtle" wigs you out as much as it does me, makes the game more palatable.) To rename your Pokémon, go to its monster page from your menu and then click on the little tiny grey pencil next to its name. Type away and voilà! Squirtle can now become Leaky Louie or Spit Take or Benedict Cumberbatch. Whatever floats your boat.

May your Pokéball tosses be ever in your favor.