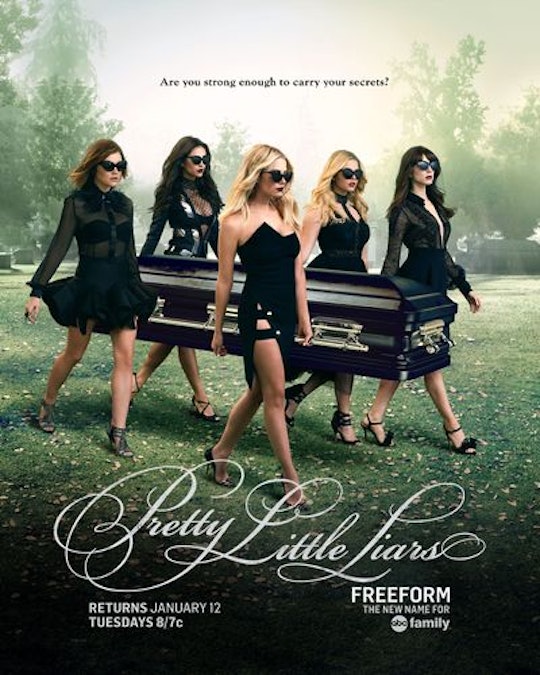 5 'Pretty Little Liars' Season 7B Theories That Could Change Everything

The first half of Pretty Little Liars Season 7 is coming to an end, with the midseason finale airing on August 30. The finale of Season 7A is sure to shake things up just like any finale does, and fans are already speculating about just what might happen during the rest of the season. The finale promises huge fights, old threats resurfacing, secrets changing everything, and even a character dying; it may sound like the same old, same old for Rosewood but that doesn't mean the results won't be explosive. These 5 Pretty Little Liars Season 7B theories explore the possibilities of what might happen on the show after the midseason finale changes everything.

There are a lot of mysteries left to be explored on Pretty Little Liars, particularly with new family members cropping up all the time and a seemingly never-ending vat of deep, dark family secrets to pull from. Things are changing for Spencer, Hanna, Aria, Emily, and Alison as they get older and start to figure out where they belong in the world and who they belong with – and of course, like always, they are being ceaselessly harassed by an unseen force that always seems to know more than they do. These girls have certainly suffered, and it doesn't look like that will be stopping any time soon. So what might happen in Season 7B?

Will Season 7 Be The Last One?

This, at least, can definitely be confirmed: Season 7 will be PLL's final season. The last ten episodes of the final half of the season will be the end of the story, which hopefully means all of the disparate threads of plot will finally be tied up – likely will some surprises along the way.

Who Will Return For Season 7B?

A lot of old characters have been returning to Rosewood in Season 7, and that will continue into Season 7B. Julian Morris is set to return as Wren, bringing everyone's favorite shady Brit back into town. Fans have long wondered if he knew more about what was going on in Rosewood than he let on, and if that's true he could set off some serious changes. A new character will be introduced too: a high school girl played by Ava Allen.

Will Emily And Alison Get Together?

A lot of the show's main ships are settling down as things get closer to the end: Caleb and Hanna are finding their way back to each other and Ezra and Aria are engaged. Things aren't looking so good for Spencer and Toby, but you never quite know what the future will bring. Though Emily's ex-girlfriend Paige has recently returned to town, she and Alison have been reconnecting all season. Showrunner Marlene King has also hinted that there will be "major revelations" for Emily and Alison.

Who Is Mary Drake's Second Kid?

Who indeed! There are tons of possibilities; fans have guessed just about every character by now, whether we know they're adopted or not. On the show, Hanna appears to be convinced Noel Kahn is the kid in question, but popular guesses include Aria and Spencer, as well as Andrew Campbell, who is confirmed to be adopted. Aria seems like a long shot, but the initials A.D. could potentially stand for Aria Drake; her year-long jaunt to Iceland after Ali's disappearance has also been mostly unexplored, which could mean she has some unknown secrets. Spencer and Mary have seemed to share a connection, and Mary has hinted at more secrets in the Hastings family.

Who Is Charlotte's Biological Father?

After it was revealed that Charlotte's mother was not Jessica DiLaurentis but Mary Drake, fans began to wonder just who her biological father was. According to King, this is something the show will revisit in 7B – and it could end up giving a hint as to who the father of Mary's second child is, too.

Will Uber A Be Revealed?

Considering the series is ending, it would be crazy if they finished things up without revealing who has been tormenting the girls since Charlotte's death. Though King wouldn't reveal if Uber A was a character fans had seen before, in an interview with Alloy Entertainment she did say that Uber A's backstory would both "heartbreaking" and "surprising." It definitely seems like fans will learn Uber A's identity, and it may be a doozy.

King spoke about Season 7 being "a season of homecomings and closures," so it looks like it will finally provide some answers – and hopefully give everyone the closure they're looking for.