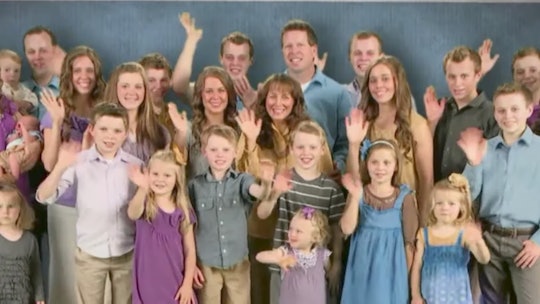 On the surface, the Duggar family may seem like they're just a run-of-the-mill, conservative family who had one bad experience with birth control, decided it wasn't for them, and then proceeded to pump out 19 children. But beyond their reasons for having such a large family, they have some seriously concerning views about things like modesty, gender roles, higher education, and more — things that even fellow Christians have called out as highly questionable. Although parents certainly have the right to raise their children as they see fit, when it comes to isolating kids and potentially severely limiting their potential, it's difficult not to be concerned. Here are five problematic facts about the Duggar family. (The Duggar family didn't immediately respond to Romper's request for comment.)

But first, let's go back to where it all started. The world was first introduced to Michelle and Jim Bob Duggar and their brood of more than a dozen children back in 2004, with the TV movie 14 Children and Pregnant Again. Since then, we have watched the super-sized family grow, and have learned about their devout independent Baptist religion, and how it impacts their everyday lives. As In Touch Weekly reported, the Duggar children are also homeschooled through Bill Gothard's Advanced Training Institute, which significantly contributes to the family's controversial rules. Many of their Gothard-inspired values are particularly problematic, too, such as ...

1. The Glaring Double Standard On Modesty

One of the first things viewers likely noticed about the Duggar family back in the day — aside from the sheer number of children they had — was how conservatively the women dressed. Michelle and the Duggar girls (as long as they're unmarried and still live at home,) adhere to strict rules of modesty, as Michelle explained in an episode of 19 Kids & Counting. This means wearing long skirts down to their ankles, no pants, long hair, minimal exposure of arms, special bathing suits — and having secret code words to tell males to avert their eyes if they encounter a woman who is immodestly dressed.

In fact, it sort of seems like the onus is automatically put on a woman if a man somehow finds himself lusting over her. Michelle explained in 2014 that the family uses the code word, "Nike" to let Duggar guys know to stare down at their shoes if nearby immodest clothing could be problematic, Cosmopolitan reported.

That's a signal to the boys, and even to Dad, that they should nonchalantly drop their eyes and look down at their shoes as we walk past her... It's meant to help keep the guys' eyes from seeing things they shouldn't be seeing. By using the single-word signal, the warning can be given quietly and discreetly.

2. Women Are Discouraged From Going To College

The teachings of the Advanced Training Institute (ATI) highly discourages the practice of women attending college, according to an essay written by a woman who grew up in an ATI family, but then left once she was an adult. So far, none of the Duggar girls have gone away to college; although Joseph became the first of the boys to give it a go. (He later dropped out.) However, as Michelle Duggar explained in a 2012 blog post for TLC, some of her children have opted to participate in a distance learning program called CollegePlus — during which they are still able to "work or pursue other experiences while studying."

3. They Teach Little Or Nothing About Sex, & What They Do Teach Is Not Medically Accurate

An excerpt from Bill Gothard's Advanced Training Institute's Wisdom Booklets reveals disturbing details about what the homeschool program teaches about sex, according to Gawker. Like that having sex with a man who isn't your husband can give you cancer, apparently.

Doctors have discovered that the seed of the man is an alien substance to the woman. It triggered responses similar to those of an "allergic" reaction. A woman who has a husband is able to develop "immunity" to this reaction; however, a promiscuous woman's immune system becomes confused and unable to distinguish alien substances. This confusion is a key to the development of cancer.

Um, just no. Nothing about this is factually accurate.

4. Victim-Blaming Those Who Have Been Sexually Assaulted

A man named John Cornish — who grew up under ATI teachings, but now runs Recovering Grace, which is an organization that helps people whose lives have been impacted by ATI — spoke with HuffPost in 2015 about ATI's "Counseling Sexual Abuse" document. Cornish allges this basically blames victims of sexual abuse/harassment. “At that point in time, I barely even knew what sexual abuse was,” Cornish told the publication. “However, I remember that he was basically telling us that sexual abuse wasn’t all that terrible because it only affected one’s body, and not the more important parts of our being: soul and spirit.”

If you look at the language in the document itself, it asks a person to consider whether the abused was at fault. This is especially problematic for the Duggars, considering the eldest brother, Josh, reportedly molested four of his sisters and a babysitter, according to The Washington Post. In response to these reports, which surfaced in 2015, Josh Duggar told People, "Twelve years ago, as a young teenager, I acted inexcusably for which I am extremely sorry and deeply regret. I hurt others, including my family and close friends." He continued:

I confessed this to my parents who took several steps to help me address the situation. We spoke with the authorities where I confessed my wrongdoing, and my parents arranged for me and those affected by my actions to receive counseling. I understood that if I continued down this wrong road that I would end up ruining my life.

5. They Shun The LBGTQ Community & Their Rights

Back in 2014, Michelle Duggar recorded a robo-call — in association with the Family Council, which promotes "traditional" family values — opposing an anti-discrimination bill in Arkansas, HuffPost reported. The robo-call transcript went as follows:

Hello, this is Michelle Duggar. I’m calling to inform you of some shocking news that would affect the safety of Northwest Arkansas women and children. The Fayetteville City Council is voting on an ordinance this Tuesday night that would allow men – yes, I said men – to use women’s and girls’ restrooms, locker rooms, showers, sleeping areas and other areas that are designated for females only. I don’t believe the citizens of Fayetteville would want males with past child predator convictions that claim they are female to have a legal right to enter private areas that are reserved for women and girls. I doubt that Fayetteville parents would stand for a law that would endanger their daughters or allow them to be traumatized by a man joining them in their private space. We should never place the preference of an adult over the safety and innocence of a child. Parents, who do you want undressing next to your daughter at the public swimming pool’s private changing area?

Because as we all know, transgender women are all secret pedophiles lurking in public restrooms to pray on peeing women and children. *Eye roll* I literally can't even with this one.

Clearly, Jim Bob and Michelle Duggar have parented their children in a way they truly think is best for their family. With that said, though, I personally see a number of glaring — and potentially dangerous — issues. Women should not be forced to feel responsible for "causing" a man to act or feel in ways that go against his morals. Both women and men should have equal educational opportunities. For their own protection, kids deserve to have factual information about sex and to know that sexual assault is never their fault. Although watching Counting On has remained one of my guilty pleasures, I truthfully feel very sad about missed life opportunities — especially for the Duggar sisters — because of many of these problematic teachings.