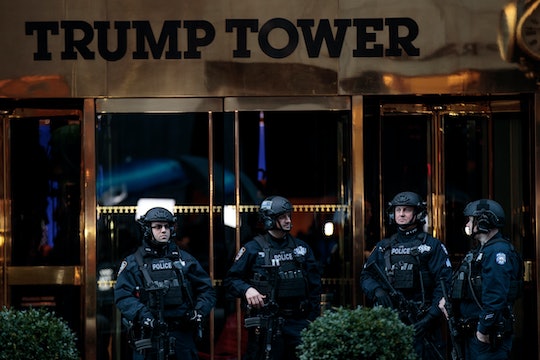 5 Questions Trump Should Be Asked

For the first time in six months, President-elect Donald Trump will hold a press conference on Wednesday morning. Trump is expected to face the press at 11 a.m. at his gilded New York City palace, Trump Tower, and boy, does he have a lot to answer for. There's no word on how long the event will last, though, so reporters will likely have to prioritize the most important questions Trump should be asked at his press conference.

Trump has informally met with reporters since the election, both at Trump Tower and at Mar-a-Lago, his Florida estate. And of course, he's been far from silent; he ran a month long "thank you tour" that amounted to little more than a series of campaign rallies after the race was won, and, as always, he's been very busy on Twitter, where he's managed to find time to feud with celebrities such as Alec Baldwin, Arnold Schwarzenegger, and Meryl Streep since the election. But this is the first time in a long time that reporters will be able to ask him direct questions, and hope for actual answers – hope for, and not expect, as Trump's well-know for giving journalists the run-around when asked direct questions. Here are the most pressing ones to watch out for.

What's Up With Golden Shower Gate?

Early on Tuesday evening, CNN broke an incredible story that both Trump and President Obama had received intelligence briefings alleging that Russia was in possession of compromising information on Trump, and that Trump's team had been conducting ongoing communication with Russia during the election. Soon after, BuzzFeed published the entire dossier upon which the briefing was based. Twitter quickly picked up the most salacious claim, that Trump had hired a number of prostitutes to perform a "gold shower" show (that's peeing) on the bed in Moscow's Ritz Carlton presidential suite, where the Obamas had been known to sleep. Because he hated them. Trump has thus far responded with a few all-caps angry tweets, and a link to a site called "Lifezette" claiming that Buzzfeed has published "fake news." I'd like more details on that. Trump's transition team hasn't responded to Romper's request for comment.

Do You Have Any Health Care Plan At All?

Trump has been crowing about repealing Obamacare for ages now, and the Republican-held Senate is already working on it, even before Trump takes office. But for all the talk of "repeal and replace," nobody's ever quite worked out what it's supposed to be replaced with. Trump has only a few vague plans that he's made public, such as allowing the sale of health insurance across state lines and permitting Health Savings Account funds to be passed down to heirs (how that's helpful, I don't know). The people need an answer. Are millions going to lose their insurance on January 20, or not?

Why Are You Still Tweeting?

The word "unprecedented" is honestly starting to lose all meaning at this point (perhaps that's why Trump repealed and replaced it), but this has to be said: in nine days, the United States will swear in a president whose side hustle is being an amateur internet troll. That is not normal. Why does Trump think it's appropriate for a president-elect (or really, any human being, for that matter) to continually pick fights on Twitter with celebrities, foreign nations, and private citizens? Is he at all concerned about the threat of his account being hacked, as he claimed happened less than three years ago? One well-crafted insult to Kim Jong-un could send us all back to the stone age.

Do we have time for them all? A Secretary of Education who has no education experience, and is vehemently against public education. A Secretary of Health and Human Services who prioritizes zygotes' rights over the health and safety of women. A leader of a white supremacist movement! He needs to answer for each and every one of them.

What About All Those Conflicts Of Interest?

Trump owns a company that does business in foreign countries, sometimes directly with foreign governments. Rather than divest himself of his business interests, he's said that he's putting his sons in charge of the company while he's in office. How, exactly, would that mitigate any conflicts at all? Even if Trump actually gave up his business entirely, and it was wholly owned by his sons, they're still his sons. He presumably cares about them, at least a little. And even his cabinet picks have conflicts. None of these people are ready to take office. Will they ever be?