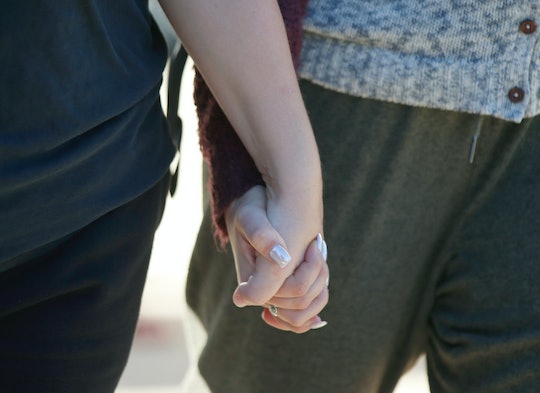 I'm in pain as I write this. I'm in pain every day. It's right there, at the front of my pelvis. A dull pressure. Bloating. I've had this pain for 15 years, but it's become worse over the last nine months. I thought it was my polycystic ovary syndrome. My doctor thinks it may be endometriosis. I'm scheduled for surgery in less than three weeks. Instead of relief, I feel fear. Fear of what I could lose. It's hard to explain, so I'll leave it to these five quotes from Amy Krouse Rosenthal's heartbreaking essay that perfectly capture partnership and parenting in the face of fear and loss.

It's no surprise that Krouse Rosenthal could evoke such emotion with her New York Times essay. The Chicago-born author and filmmaker has written more than 30 children's books in the last 12 years, many of which landed on the New York Times bestseller list (I Wish You More, Cookies: Bite-Size Life Lessons, and Uni the Unicorn, to name a few). She's also published two endearing memoirs — Encyclopedia of an Ordinary Life and Textbook Amy Krouse Rosenthal — as well as worked on several films. Krouse Rosenthal is a prolific and captivating writer, and her words in this essay have resonated deeply.

I've thought about death a lot over the last year. After my father passed away last February, it's all I could think about. But for the last few months, death has been right there, in the front of my mind. Surgery is the only way to get an accurate endometriosis diagnosis; my dad died due to complications from anesthesia. I thought the nagging fear of dying while under was because of how my father passed. But after reading Krouse Rosenthal's devastating essay, I realized it's because of so much more. I'm afraid of what the surgeon may discover. I'm afraid they will find more than, using Krouse Rosenthal's words, the "no biggie" endometriosis I may have.

I'm scared that my partner and son will talk about me in the past tense, sooner than I planned.

I know that I'm not in Krouse Rosenthal's position. I know that I do have more days with my family. I know that my fears could be unfounded — that I'm doing this to myself. But I am still crying as I write this. I'm crying not only because Krouse Rosenthal's essay hits a little close to home. I'm also crying because this love letter to her husband, Jason, is a love letter no one should have to write. But she did. She wrote this piece because she knew that, even though she couldn't have "more," she wanted "more" for him. And that's at the core of partnership. Here are five powerful quotes from Rosenthal's essay.

When You Have The Future Planned First

It was 1989. We were only 24. I had precisely zero expectations about this going anywhere. But when he knocked on the door of my little frame house, I thought, 'Uh-oh, there is something highly likable about this person.' By the end of dinner, I knew I wanted to marry him. Jason? He knew a year later.

When Their Presence Is All You Need To Cheer Up

If our home could speak, it would add that Jason is uncannily handy. On the subject of food — man, can he cook. After a long day, there is no sweeter joy than seeing him walk in the door, plop a grocery bag down on the counter, and woo me with olives and some yummy cheese he has procured before he gets to work on the evening’s meal.

When The Little Things Only Matter

If you’re looking for a dreamy, let’s-go-for-it travel companion, Jason is your man. He also has an affinity for tiny things: taster spoons, little jars, a mini-sculpture of a couple sitting on a bench, which he presented to me as a reminder of how our family began.

When They Want To See You Happy

This is a man who emerges from the minimart or gas station and says, 'Give me your palm.' And, voilà, a colorful gumball appears. (He knows I love all the flavors but white.)

When True Love Is Not Perfect, But Perfect For You

If he sounds like a prince and our relationship seems like a fairy tale, it’s not too far off, except for all of the regular stuff that comes from two and a half decades of playing house together. And the part about me getting cancer. Blech.

Krouse Rosenthal's essay showcases a certain strength and devotion that is both humbling and tragic. No one should have their great love slip away as the result of something totally outside of their control. Krouse Rosenthal deserves the "more" she wants. I wish she could have it. I wish it with every bone in my body.

Right now, there is no dedicated test for ovarian cancer. Doctors rely on a transvaginal ultrasound and blood tests to detect the presence of the disease, but they are not reliable. When ovarian cancer is found, it's often too late. New, improved ways of testing for ovarian cancer are being studied, but scientists need your help. To donate to ovarian cancer research, visit Ovarian Cancer Research Fund Alliance.