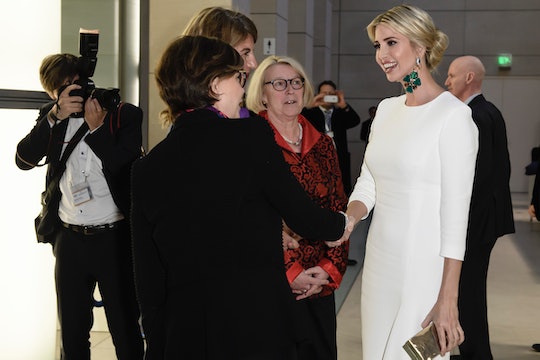 For the most part, strong, powerful women are something awesome to behold. In a society still dominated by men, and one that continues to disregard women's rights as human rights, it's always refreshing to see a smart, successful woman taking charge. But, the women's rights movement isn't one-dimensional, and just because a woman does well for herself doesn't mean she should automatically be labeled a feminist. Such is the case with Ivanka Trump. While the first daughter claims to be a feminist, her point of view is skewed. And more so, there are quite a few moments and quotes from Ivanka Trump's new book, Women Who Work, that show her privilege — much of which has shaped her life and her public identity.

Released May 2, Women Who Work: Rewriting the Rules for Success, Trump's new book centers on the idea of the modern working woman. In the book's introduction, Trump says her "hope for this book is that it will help our generation change the narrative around women and work, and embolden you to become a more enlightened leader who creates the life you want to live." However, from the very first paragraph of Trump's latest book, her sparkly lens of privilege takes center stage. From a failed attempt at recreating a Wild-esque soul-searching hike, to the very idea of Trump's book in and of itself, Women Who Work, is not meant for all women who work, that much is clear.

Here are a few of the most damning excerpts:

When She Admits Her Privilege, But Still Doesn't Get It

In the preface of her new book, Trump makes certain to ensure readers that she completed this book before the November presidential election. She goes on to explain that she will take a "formal leave of absence," from her personal brand, as well as The Trump Organization as soon as her father takes office. Obviously, we know she did that, but that's not all she says.

"... The potential to improve the lives of countless women and girls has caused me to fundamentally consider where my work will do the greatest good," Trump states. "I recognize the privilege and responsibility I have to use my voice to make a positive impact where I can." But, in order to "improve the lives" of the females Trump claim she wants to help, and use her "voice," Trump kind of needs to step up. Clearly, she's capable of doing this, as she so like to reminds us all of her plethora of successes. But still, Trump has remained complicit in her father's misogynistic language, actions, and orders.

Perhaps even more frustrating, she remains uninformed about issues that matter, such as Planned Parenthood, and has yet to do anything significant for American women, aside from selling them stacks of tailored clothing and shoes. But hey, at least she "recognize[s] the privilege," she has, right?

When She Went Soul Searching Before Joining The Family Business

In the introduction of Women Who Work, Trump describes a hiking excursion in Patagonia where she seriously had to delve deep into herself before deciding if she wanted to join the family business. "I had just decided to leave the Brooklyn-based real estate company Forest City Ratner, my first employer and professional home of the previous twelve moths, to take the leap and join our family business."

Yes, Trump did just describe the ability to leave a job with the knowledge that her family has a multi-billion dollar company ready to hire her as a "leap." Obviously, working with family is admittedly a challenge, but Trump wasting space in her book to talk about how worried she was in doing so truly heightens the glaring nature of her privileged life. Not all women, or men for that matter, are so lucky as Trump was to have a family business to fall back on if they aren't happy in their current position. And Trump's inability to recognize that further proves that she is still so completely unaware of her status in the world.

When She Failed To Recognize Her High Status In The Office

Describing how she's able to "compartmentalize" her life, Trump says, "The rest, I leave for later; I don't respond to emails that are not time sensitive during the course of the day."

While it might not initially seem like much, this statement is in fact, loaded. Trump is forgetting that many women don't share the same name as the company in which they work, and therefore can't simply choose to disregard their work or messages in favor of focusing their energy solely on other things, like their kids, their personal lives, or relaxation time. For many, failure to respond to emails in a timely manner could result in disciplinary actions, or even, termination. Besides that, Trump is disregarding the privilege in being able to go home and tuck her kids in at all. Many women don't have that luxury when they're working.

When She Sacrificed Her Massages & Self-Care Time

In a highly-criticized passage of the book that's currently making the rounds, Trump describes her version of "survival mode":

I worked and I was with my family; I didn't do much else. Honestly, I wasn't treating myself to a massage or making much time for self-care. I wish I could have awoken early to meditate....

So, clearly, this passage basically speaks for itself. The fact that Trump deems "survival mode" as having to go without a massage or self-care time is a bit out of touch, considering that the majority of working women do this same thing every single day and get no pity for it (not that they necessarily need it). Put simply, Trump's "survival mode" is basically the average woman's typical day. The lack of recognition in this sense is troubling, yet unsurprising.

When She Didn't Understand The Meaning Of The Word "Equal"

In describing what she thinks makes a good worker, Trump says, "I also believe that passion, combined with perseverance, is a great equalizer, more important than education or experience in achieving your version of success."

By claiming that education and experience aren't as important as passion and perseverance, Trump is diminishing all those who have sacrificed so much in order to get a good education, or get the right job, or those who weren't able to get an education... or those who can't get experience, because most jobs require, well... "experience." Passion and perseverance are undoubtedly important. But it's words like these that simply dismiss the real-life struggles that most women — especially those who are underprivileged — have when entering the workforce.

In today's world, just having passion is never usually enough for people, especially women, to succeed. Women Who Work misses the mark, in that sense. Worst, it proves that Trump is living in an imaginary, Utopian bubble, and the rest of us simply weren't invited.