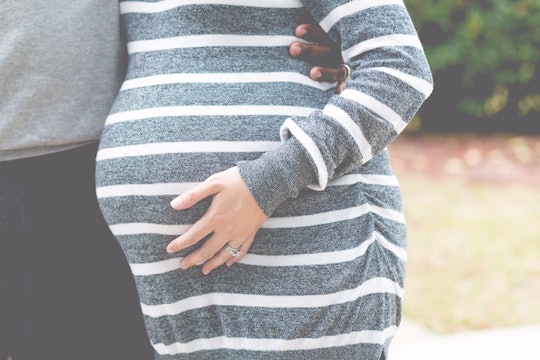 Apparently, when a woman reaches a certain age, her vagina and all things related to it are considered old. They are seen as ancient dinosaur fossils with cobwebs growing on them, and are the dreaded b-word — barren. At least, that's the message being sent. Sarcasm aside, there is a real problem with calling a woman's pregnancy "geriatric" because in most cases she and her uterus are not geriatric. There are plenty of reasons "geriatric pregnancy" is a harmful term, and most of them have to do with the fact that the term is so extreme and not representative of what the woman is going through at all.

According to Healthline, geriatric pregnancy is considered any pregnancy that occurs after the age of 35. You could be pregnant in your mid to late 30s and considered to be having a geriatric pregnancy. It sounds really bizarre. I'm in my early 30s. I'll admit to having a little back pain here and there, and maybe I can't recover from a hangover as easily as I used to, but if I were to get pregnant in a few years it would be called "geriatric?"

The term "geriatric pregnancy" doesn't make sense especially when Merriam-Webster dictionary defines geriatric as an aged person. The American Academy of Family Physicians refers to geriatric as the care of a person over 65 years old. Surely not everyone who is 65 feels or considers themselves to be geriatric, but that's generally the baseline age for geriatric care. So why in the world would anyone tell a pregnant woman who is age 35 and older that she is having a geriatric pregnancy, when in all other scenarios 65 is considered the golden age of geriatrics? It's befuddling.

Thankfully the term "advanced maternal age" has come onto the scene and is replacing "geriatric pregnancy" little by little. Although to be honest, I'm not sure it's much better than the latter. Even so, the geriatric pregnancy phrase still gets tossed around and here are five reasons we should stop using it entirely.