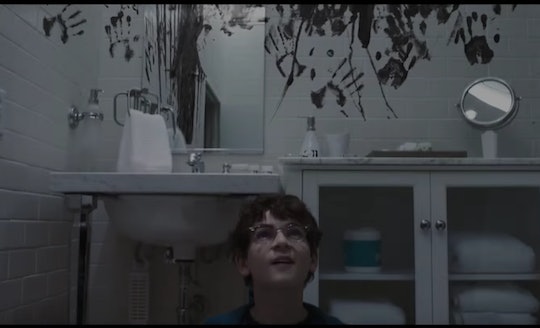 When it comes to finding the perfect movie to see in theaters with kids, it can be tough. There are such a limited section for kid friendly movies when it comes to recent releases — and no one wants to see the same film over and over again, especially in theaters. Horror films are a popular genre in movie theaters all across the country but might not be the best decision to watch with younger children. Before making that decision to watch a horror film with children, here are five recent movies that are too scary for kids and some safer alternatives.

Keep in mind that movie ratings exist for a reason and even though children can get into a movie with a PG-13 rating with the accompaniment of an adult, that doesn't mean they should. But parents know their children best, therefore they should use their best judgement when choosing a film for their kids to watch. What may be too scary for some but be tame for others. Before going out to theaters this summer or turning on one of these films, read this list and see just what recent films might be too scary for children and what films are probably okay.

The Darkness is one of the only genuinely scary films from the horror genre currently playing in theaters. According to MovieFone, The Darkness, is about a family that goes on vacation to the Grand Canyon. After returning home, strange events start to happen, "including young son Michael's increasingly erratic behavior. The Taylors learn that Michael brought back some mysterious rocks that he discovered inside a cave."

While the possessed little kid is kind of cute and the story seems like a thrilling vacation adventure, the content of the film and its PG-13 rating (for some disturbing violence, thematic elements, and language) makes it a little too scary for kids.

While it might be a prequel and sequel of the classic fairytale Snow White, The Huntsman: Winter's War is anything but a fairytale. The film tells the tale of Evil Queen Ravenna and her sister, Freya, who after a betrayal, fled the kingdom. When Freya finds out that Ravenna can be resurrected from the magic mirror, Freya and Ravenna team up to threaten the enchanted land with the darkest force that it has ever seen.

While the film has ties to fairytale origins, and is not necessarily a horror film per-say, it does have graphic material dark imagery and a PG-13 rating. Older kids might enjoy this one with one of their parents, of course. It's a pretty fun adventure, if they can understand or cope with the violence — but I think it might be best to just sit home and watch Snow White with the younger ones again and wait until they're older to see this origin story.

The film, which is still showing in some theaters, tells a story of a woman who finds herself in a bunker with two men after a massive chemical attack has made air unbreathable. After taking matters into her own hands, the woman discovers the truth about the outside world.

While the film might not be outwardly gory at first (no spoilers, but it gets bad later on...), but it is incredibly thrilling and rated PG-13, which is a downfall. It is rated PG-13 due to its thematic elements, some disturbing violence, brief sensuality and language. Keep the kids at home before going out to see this film, or alternatively, wait until it is out on DVD in one month.

Don't let the cute doll fool you or your kids. The Boy is about a young American woman who takes the job as a nanny in a remote English village. The woman discovers that the boy is a life sized doll and after breaking some rules, realizes that the doll might actually be alive.

While the plot may sound a little crazy, The Boy looks incredibly scary and not suitable for children due to its thrilling imagery and PG-13 rating. The film is currently on DVD so if you are curious about how scary it truly is, you can watch from the comfort of your own home.

The newest Blake Lively film, whose trailer has been taking social media by storm might be a little too scary for kids. The film's trailer, which has important messages of survival and empowerment features graphic images of shark attacks — something that might make kids too afraid to go to the ocean for a while.

While the film's official release date isn't until June 29 and the ocean might seem appealing to some kids, as an adult it definitely terrifies me.

There are, however, a few recent films both out in theaters and on DVD that are definitely suitable for children. If you're looking for a non-scary film, consider these three alternatives.

The Jungle Book is one of the most critically acclaimed films of 2016, with a 95% fresh rating on Rotten Tomatoes. The film is a live retelling of the animated Disney classic and features newcomer Neel Sethi doing some incredible acting.

While India might have declared it to be scary, it's 3D effects give the film a more lifelike feeling and definitely heighten the experience of the film.

The film, which comes to DVD on June 7, tells the story of the modern mammal metropolis, Zootopia. Through animation, the film tells a story with a deeper meaning that is both thoughtful and inclusive. But you'll have to watch for yourself to see what I mean. Zootopia is one of the highest rated films of 2016 and is definitely a film both kids and adults would enjoy.

While the film doesn't come out for another month, it is highly anticipated by both children and adults. As a sequel to Finding Nemo, Finding Dory reunites the forgetful fish with her loved ones and she learns some pretty important messages along the way — which sounds like a great film for children.

While there are some scary films out there, there are also definitely some safe options. When it comes to what will scare them, you know your children best so use caution in any movie you watch. However, I guarantee these kid friendly films are films everyone will enjoy and definitely won't scare them.