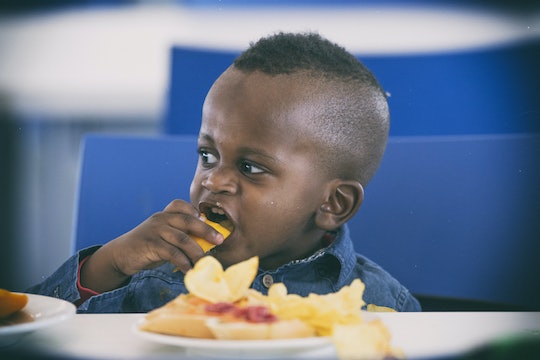 Toddlers are notoriously picky eaters, at least in my experience. You offer mashed potatoes, they want french fries. You give them crackers, they scream for chips. It's frustrating, to be sure, but it's usually their way of vying for independence. It's also, at times, scary. I mean, can a child really survive on Cheerios and yogurt bites? Turns out, there are red flags a toddler isn't eating enough that every parent should be aware of. You know, just in case.

According to RaisingChildren.net, being a "picky eater" is part of your toddler's normal development. Yes, it's frustrating, but it happens for a few reasons. For example, your child might be in-between growth spurts and, as a result, requires less caloric intake. (In other words, they simply aren't hungry.) They might also be more interested in what's going on around them at meal time, so it's easy for them to be distracted. And, of course, there's the undeniable fact that toddlers have small stomachs. While it's understandable you want to create a positive eating environment, and make sure your children are getting enough nutrition, there is a fine line between a child not eating enough due to normal developmental habits, and something more serious.

In a 2012 study, 25 to 35 percent of kids were considered to be "picky eaters." The results of the same study, however, found that it's typically parental expectations that are to blame for a child's "pickiness." For the most part, children are eating the right amount of food for their age and weight. Basically, it's a power struggle between stubborn toddler and concerned parent. But, again, there are some red flags you should be on the lookout for, especially if they're sudden, severe, and/or persistent.

More Like This
26 Toddler Lunch Ideas They’ll Actually Be Excited To Eat
17 Best Potty Training Products For Toddlers
Can You Help Your Baby’s Hair Grow?
Abbot's Formula-Producing Plant Can Reopen In As Early As 2 Weeks — Now What?