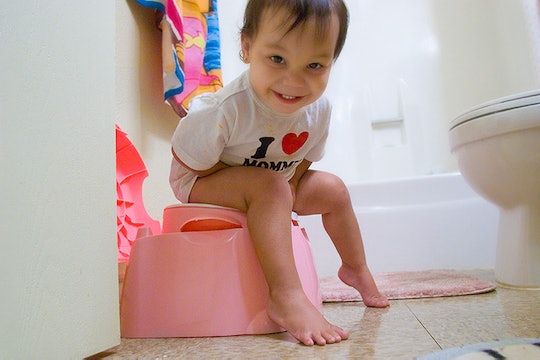 5 Shameless Tactics Every Parent Eventually Resorts To While Potty Training

Few terms can either chill a parent’s blood, invoke a cold sweat, evince a shudder, or encourage a wry chuckle (if enough time has passed) quite like “potty training.” For the very lucky, you only have to clean up a small pond’s worth of pee over the course of a few weeks before you're in the clear, but for most people, potty training a kid involves a series of trials and tribulations that can take months (or in some cases years; our thoughts are with you). Like all aspects of child-rearing, there is no silver-bullet approach that works for all kids. Play your cards wrong on this one and you may be one of the unfortunate few whose kid decides to spite-poop. (A "spite-poop" is where, as you might have guessed, a kid poops their pants completely out of spite for you and in spite of their own comfort. It’s the ultimate “You’re not the boss of me.” BECAUSE KIDS ARE ACTUAL MONSTERS SOMETIMES WHO HATE YOUR HAPPINESS, PEOPLE!)

While you do have to choose your approach carefully, I’ve included some admittedly pathetic (but sometimes successful) approaches below along with predicted success rates (as calculated by my highly scientific research of having potty trained one child). We might be without pride at the end of this, but goddamnit, we shall also be without shame. Do what you have to do.