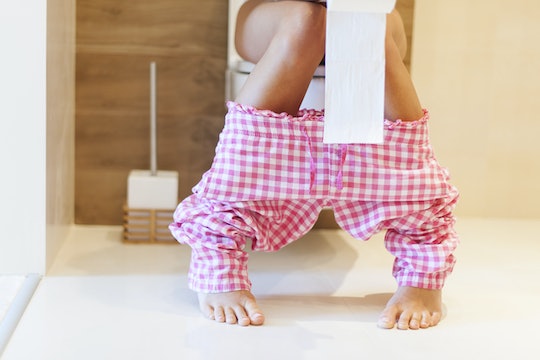 Although it might not be anyone's favorite subject, your pooping habits can say a lot about your overall well-being. In fact, there are some surprising things that the time of your bowel movements can mean for your health overall. For the most part, there are a few bowel movement times that may be a cause for concern.

First, though, it's important to understand that there's no set, specific time for humans to poop. "The rule with pooping is there's no such thing as normal—just normal from one person's perspective," said Dr. Schnoll-Sussman in Prevention. In reality, a person could poop three times a day or three times a week and still fall within the healthy parameters, according to the Cleveland Clinic. It just depends on what is normal for that individual. In general, though, but most people tend to poop around the same time and frequency each day, according to Healthline. (Mornings tend to be very popular). So if your bowel habits suddenly change, or they cause you concern for some reason, then don't hesitate to contact your doctor to learn about treatment options. As it turns out, something as simple as the times of your poops may say quite a bit about your health.

More Like This
Everything You Need To Know About Postpartum Blood Clots
Abbot's Formula-Producing Plant Can Reopen In As Early As 2 Weeks — Now What?
Should You Be Giving Your Toddler Melatonin To Help Them Sleep?
All Your Questions About Getting Pregnant After A Tummy Tuck Answered