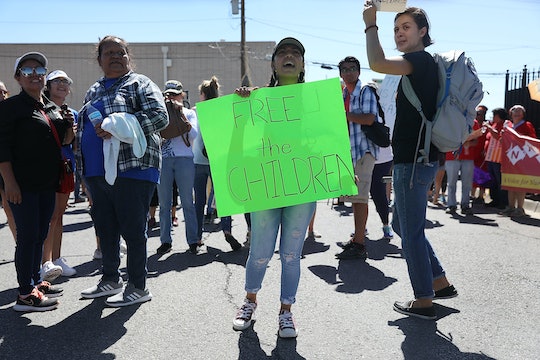 5 Powerful Sign Ideas For The Families Belong Together Protests

When Attorney General Jeff Sessions announced his zero-tolerance immigration policy in April, many Americans expressed concern for immigrant families and asylum seekers. The worry was justified because in May, the Trump administration — along with Immigration and Customs Enforcement (ICE) — began separating families at the United States-Mexico border. The disturbing policy propelled advocacy groups to create a nationwide protest called "Families Belong Together," and many rallies across the country will take place on June 30. And similarly to the Women's March that took place in January, many people are busy brainstorming sign ideas for the event. That being said, here are five sign ideas for the Families Belong Together protests.

When President Donald Trump signed an executive order on Wednesday halting family separations at the United States-Mexico border, some assumed the crisis was resolved. Unfortunately, however, the situation is still as dire as it ever was, especially since there is no concrete plan in place to reunite parents with their children.

Additionally, The Texas Tribune reported on Sunday that the government is telling migrant families they'll be reunited with their kids if they sign voluntary deportation documents. While the tactic isn't a new one, it's facing greater scrutiny following the rash of family separations. Efrén Olivares, an attorney with the Texas Civil Rights Project, explained to CNN:

We have no reason to believe that (voluntary deportation) is the fastest way for parents to be reunited with their children. Putting them in that position is not a voluntary (deportation); it's being obtained under duress.

In short, American citizens have every right to be angry and upset with the government at the moment. Families are still separated, and there's no immediate path to reunification in sight. The good news is the Families Belong Together protests will give Americans across the country the chance to express their outrage. And since June 30 is such an important day, it makes sense people want to have the perfect sign to represent their thoughts. Here are five sign ideas for the Families Belong Together protests.

Although it's a bit of a cliché, it's often true that less is more. Joey Mason, a sketch journalist and character designer drew a simple sketch of a family in Los Angeles working on their signs for the protest when the small child in the picture interrupts her parent to ask, "What are you going to put?" The parent simply responds: "Families Belong Together — that's all I have to say."

Of course, that isn't the most creative or pointed slogan, but it does the job well. Families belong together, period. There is no justification or argument that can erase this simple truth, so why say anything more than what needs to be said? Keeping it simple with protest slogans is not only effective, but it reinforces the idea that there is no excuse for this crisis.

Call Out The Hypocrisy

It goes without saying the Trump administration is rife with hypocrisy at the moment. Case in point: one day after Trump defended his administration's policy of family separations, United States ambassador to the United Nations Nikki Haley withdrew the U.S. from the U.N.'s Human Rights Council due to its so-called "mockery of human rights." You can't make this stuff up.

Although hypocrisy is always frustrating, it's especially maddening when it concerns heartbreaking family separations. So, if you want to find an appropriate medium for your rage, a protest sign is a good place to start. Take one protester at a June 20 rally in Kansas City, Missouri, for instance. The protester in question holds a sign that reads, according to Twitter: "You can't claim family values if you don't value families." *Insert slow clap here*

Considering there are plenty of other examples of hypocrisy in this administration, I have no doubt people will have trouble coming up with more snappy responses like the one mentioned above.

Many Americans want to lend their support to migrant families, yet they don't know how to do so. While donating money to support groups is important and helpful, sometimes sending a message of encouragement is especially needed. For example, why not try a sign that reads, "We see you + we hear you + and we won't abandon you." Powerful, right?

If you're having trouble coming up with a slogan, you can't go wrong with a heartfelt message acknowledging the pain and trauma these families are going through. Speaking from the heart will never fail you.

Sometimes you have to be as as straightforward as possible to get your point across. Take this protester in Dublin, Ireland, for example. The sign reads: "I hate making signs but, FFS you're caging kids!!"

Yep, that sign sums up one of the administration's cruelties perfectly. Sadly, there are plenty of other harsh realities you can highlight with your own sign. No matter what you choose, however, it's bound to grab someone's attention.

When All Else Fails, Use A Harry Potter Reference

If you have a child or are truly at a loss for what to put on your sign, draw inspiration from this protester's Harry Potter-inspired slogan: "Voldemort called ... he said to take it down a notch."

While some might argue this is sign too lighthearted given the serious situation, I think it's a perfectly fine option for a young person or someone who is really struggling emotionally with the family separations. It's OK if you need to rely on some humor to get you through this dark time. Do whatever makes you feel comfortable — what matters most is that you're speaking out against the inhumane policies.