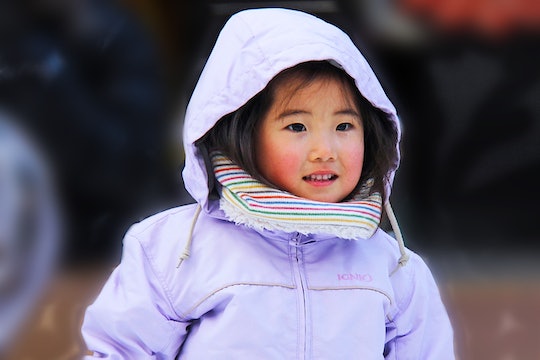 I love hanging out at the beach, but there's something magical about celebrating winter with small children. I look forward to drinking hot chocolate, ice skating, and even playing in the snow with my little ones — especially since I don't ever have to drive in it or shovel it. But since kids don't always have the words to tell you when they're too cold, it's up to parents to keep a close eye on their small children to know when the winter fun has become too much to handle. As the temperatures drop, you need to know the signs of frostbite in toddlers.

According to What to Expect, frostbite is the result of skin tissue damage caused by exposure to extreme cold. The nose, ears, cheeks, fingers, and toes are the spots most commonly affected by frostbite in small children. As Kids Health mentioned, children are typically affected by frostbite more often because their skin loses heat at a faster rate than adults. Redness of the skin, numbness, and swelling are some of the common indicators that your child has a case of frostbite due to overexposure to the cold.

If you notice the signs of frostbite in your child, you should bring him inside and immediately remove his cold, wet clothing, as Today's Parent suggested. You should then place the affected skin in warm water to thaw for at least thirty minutes. You may want to give your child a dose of ibuprofen to deal with the pain.