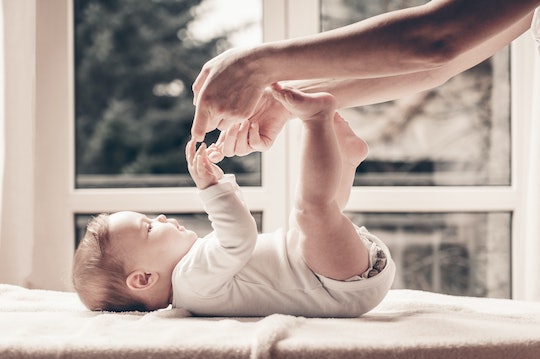 5 Signs You Should Get Your Child's Diaper Rash Checked Out

There's nothing worse than changing your baby's diaper and discovering a painful, red rash inside. And though some babies are more prone to developing these rashes than others, it's important to look for signs you should get your child's diaper rash checked out by a doctor, so you can be prepared if and when it happens. Most diaper rashes are harmless and go away on their own, if given enough airflow and dryness, or with a bit of diaper rash cream. But others can be severe or a sign of a more serious infection meriting antibiotics, so paying attention to the rash is important.

Luckily, diaper rashes are fairly easy to prevent, especially once you know what causes them. According to What To Expect, the rash is caused by lack of airflow, wetness, enzymes from baby's poop, or irritation from the diaper rubbing on their skin. Simply changing their diaper more often may be all it takes to prevent rashes in the future.

But, if your child has already developed one, it's important to keep the area dry, use creams specifically for diaper rashes, and keep an eye on the symptoms of a severe rash or infection, just in case.