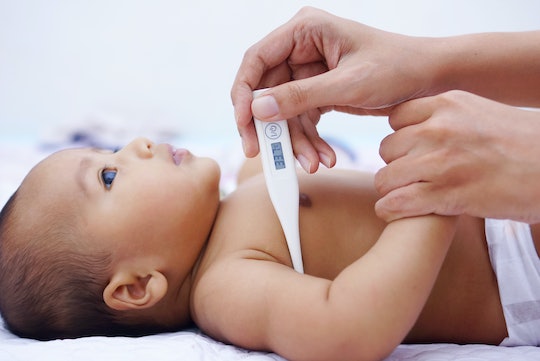 Of all the dread-inducing moments you'll experience as a new parent, there are few quite so unpleasant as the very first time your baby throws up (or exhibits some other sign of gastrointestinal distress). Of course the fear is that your child has picked up some awful virus that's going to keep you both up all night covered in vomit — but wait, how can you tell if she's actually sick? Babies spit up and have weird poops like, all the time. What are the signs your baby has a stomach bug, for real?

First of all, it should be noted that while the term "stomach flu" is commonly used to describe these types of illnesses, the flu virus has nothing to do with stomach bugs, according to the American Academy of Pediatrics. Instead, these are most commonly caused by norovirus and rotavirus (or similar viruses, like enterovirus, astrovirus, and Norwalk virus). Kids under the age of 2 are usually hit hardest by the extremely contagious rotavirus, though the increasing usage of a vaccine (given to babies at 2, 4 and 6 months of age) which protects children against five types of rotavirus might mean that your little one is spared (but it might not).

Norovirus, meanwhile, is the "leading cause of illness and outbreaks from contaminated food in the United States," according to the Centers for Disease Control and Prevention, and also spreads quickly in "closed places like daycare centers, nursing homes, schools, and cruise ships." (All those cruise ship illness outbreak horror stories? Blame norovirus.)

Ultimately, however, the symptoms for most stomach viruses are similar, as are the treatments: rest, extra fluids, even more rest, and extra, extra fluids. And those symptoms are definitely a lot different than non-stomach bug gastric disturbances — so if your baby is legitimately ill, you'll know for sure before long! (Also, take note: Some of the earlier symptoms aren't as dramatic as what's waiting in the wings, so you might miss them if you're not looking.)

More Like This
What To Do If Your Baby Sounds Congested
When Can A Baby Sleep On Their Stomach? Doctors Weigh In
Why Does My Newborn Shake Sometimes? A Pediatrician Explains
A Parent’s Guide To Stomach Pain In Kids
What Parents Are Talking About — Delivered Straight To Your Inbox