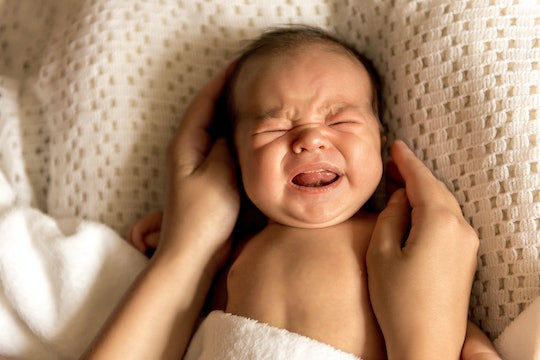 5 Signs Your Baby Isn't Sleeping Enough, Because Babies Need Their Beauty Sleep Too

It's pretty much universally accepted that babies can cause sleep deprivation in just about everyone around them. But can babies themselves be sleep deprived? Research on the subject isn't concrete, but there is a lot of evidence to suggest that even your baby may not be getting enough sleep. Luckily, if you're on the look out for the signs your baby isn't sleeping enough, you should be able to spot it and simply be more proactive at helping your baby sleep.

According to the Baby Sleep Site, as strange as it sounds, there is some evidence linking sleep problems in babies to ADHD and other issues like chronic sleep disorders later in life. The most common sleep disorder in children are things like very frequent waking, teeth grinding, sleep apnea, Restless Leg Syndrome, and sensory processing issues. And though certainly not every child who develops these issues can trace its origin to babyhood, good sleep habits do start young. Your baby is more likely to be affected by other side effects of not getting enough sleep like fussiness and being extra clingy

Other things like sickness, travel, and growth spurts can mess with your baby's sleep schedule as well, so don't be overwhelmed if your baby isn't sleeping perfectly every night. Rather, keep an eye out for these signs that your baby may be overly tired, and consider laying them down for an extra nap, or creating a more relaxing sleep environment so they're able to sleep longer.

More Like This
Here's When Your Baby Might Start Sleeping Through The Night For Real
Baby Not Napping At Day Care? These Reasons May Be Why
These 4 Sleeping Positions Will Keep You Comfortable After A C-Section
Here’s What You Need To Know About That Viral 1960s Baby Formula “Recipe”