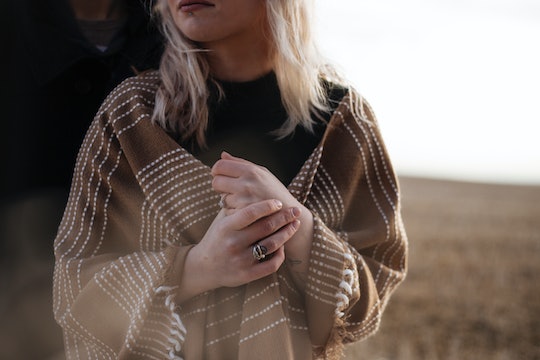 Many new moms, especially those with a history of mood disorders, fear being diagnosed with postpartum depression, also known as PPD. The condition, however, isn't a character flaw or a weakness. It's simply a side affect from giving birth, which lots of mothers have experienced and overcome. That being said, tere are signs your postpartum depression is actually dangerous, and as a new mom it's important to identify these signs so that you can seek treatment right away.

PPD is not what is commonly referred to as the "baby blues," a mild, brief bout of depression. It is in fact a severe, long-lasting form of depression that comes as a result of giving birth, according to the Mayo Clinic. The Centers For Disease Control and Prevention (CDC) estimated that one in nine women experience depression before, during, or after their pregnancy. The Illinois Department of Public Health, suggested that the number of cases could be even greater. As many as 20 percent of new moms are believed to experience postpartum depression.

The stigma of PPD has kept many depressed mothers from seeking help, which means they may be exhibiting symptoms that can put themselves and their families in danger. Here are some signs that your postpartum depression is actually dangerous and you should seek help.

More Like This
10 Moms On Why They Exercise
When Does A Baby Recognize Their Father? A Pediatrician Explains
What To Do If Your Toddler Keeps Taking Off Their Diaper At Night
A Parent’s Guide To Stomach Pain In Kids
What Parents Are Talking About — Delivered Straight To Your Inbox