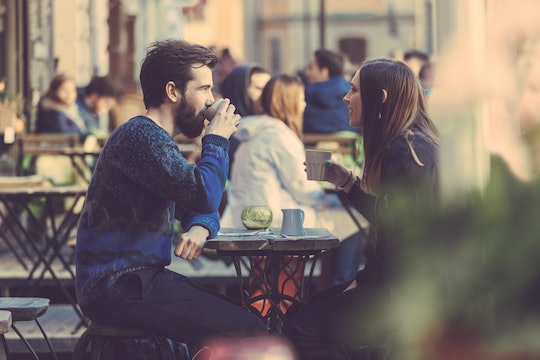 5 Signs You're Living With A Pathological Liar

I would know. I was married to one. For five years, he lied to me. For four of those five years, I had absolutely no idea. And then our daughter was born, and he tried to get away with a lie so big his entire house of cards collapsed.

Three weeks after I gave birth, I found nearly indisputable evidence that my husband was leading a double life (complete with girlfriend). Instead of coming clean though, he lied. And lied and lied. For months, I vacillated between knowing with certainty that my husband was not the person I thought he was, to desperately wanting to believe that it was all a silly “misunderstanding.” More and more disturbing evidence surfaced, and I begged for the truth, yet he refused to own up.

According to Psychology Today, while compulsive, pathological lying has no “official diagnosis,” it is associated with a range of personality disorders, such as borderline, narcissist and antisocial.

The sociopathic/narcissistic pathological liar has no moral qualms about lying which makes it easy to look someone in the eye and tell a bold-faced lie. Some pathological liars believe their lies; living in a fantasy world that they’ve constructed. In other cases of pathological lying, the liar experienced trauma early in life and began lying as a coping mechanism, and, at some point, lying became more comfortable and “truthful” to him than the truth.

The good news? If you know what to look for, you can identify a pathological liar. The tricky part? Pathological liars are much more skilled at lying than the average Joe. But the signs of pathological lying are still deeply embedded in a person’s behavior.

Here are five signs that you’re living with a pathological liar:

1. He Uses The Silent Treatment As A Weapon

When you catch your partner in a potential lie or you try to talk about something that just doesn't add up, your partner goes from doting and loving to... silent. You go from feeling completely secure in the relationship to feeling as if you're walking on eggshells. He can go from one extreme to the other quickly and without warning. Often you find yourself keeping your head low and being as agreeable as possible, so you don't have to endure one of his silent treatments or "moods."

When I confronted my husband about his big lie, he vacillated between rage and complete silence. Outofthefog.com, a blog about emotional abuse, defines the silent treatment as: “A passive-aggressive form of emotional abuse in which displeasure, disapproval and contempt is exhibited through nonverbal gestures while maintaining verbal silence.”

2. Criticism Comes Right Back At You…. Times 10

You try to have an open discussion with your partner about something that bothers you and he changes the course of the conversation to how really you're to blame for a, b and c, that you didn't even know were related to the current conversation but somehow now seem massively important. Suddenly, you're wracking your brain for how to make it up to your partner for being insensitive to his needs. He's shifting the blame to you and even making you feel like the guilty one.

On PsychologyToday.com Jeff Wise, author of Extreme Fear: The Psychology of Your Mind in Danger, called this tactic a “counterattack” and noted, “Just as most of us are uncomfortable telling lies, most are uncomfortable accusing others. This discomfort can be used in the liar's favor.” Brilliant, really.

3. Your Partner Is An Expert At The Pity Play

You bring up some strange credit card charges and your partner breaks down about his grandma's cancer...that you didn't even know about until this very moment. Psychologist Martha Stout, author of The Sociopath Next Door, calls this the “pity play,” and she believes that it is the number one tactic employed by the sociopathic liar. Even if the sob story were true, it still wouldn't justify the lying. A pathological liar knows our natural response is one of empathy and pity and they use it full to their advantage.

4. There Is Rage In Your House

I remember my ex-husband screaming at me with such a cold look in his eyes that I completely forgot what I was upset about in the first place. Reacting with anger is another technique used by the pathological liar. You try to have an open discussion about something that just isn't adding up, and he erupts in a rage. You immediately shut down. At first maybe you're upset and pissed right back. But then, when it becomes clear that your partner is not backing down from his volcanic rage, you become nervous you've somehow gone too far and pushed him over the edge. You even apologize to him for making him so angry and find yourself being more careful in the future to not set him off.

5. He Has Lied To Others Repeatedly

This is the single biggest indicator that you're living with a pathological liar. If you have seen him unflinchingly and convincingly tell a lie to someone else, stop right there; you are living with a stone cold liar. You may try to rationalize that he would never lie to you, in fact, he only lied to protect you! But if he can lie to someone else with ease, he can, and will, do it to you.

Pathological liars will often lie about small, unimportant things that may leave you scratching your head. Pay attention to these supposedly insignificant lies. Ron Schouten, author of Almost a Psychopath, describes a pathological liar who lied “about little things, like what he had had for dinner the night before.” The take away? A liar is a liar. Period.

There are different types and levels of lying, but if you suspect that you love a pathological liar, talk to a counselor or therapist. Your primary care physician is also a great resource. Every case is different; determine what is safe for you and your situation. Keep in mind though that pathological liars rarely, if ever, change their ways, and so my advice is to seek help for yourself first. If you determine that your pathological liar is also on the psychopathy spectrum, your only recourse is going no contact. Setting off on my own with a newborn baby was the hardest thing I've ever done, but it also made me into a stronger, deeper, and more empathetic person. While breaking free from the pathological liar may feel impossible, you must take steps to distance yourself from him/her as soon as possible; your sanity, physical health and future happiness is at stake.