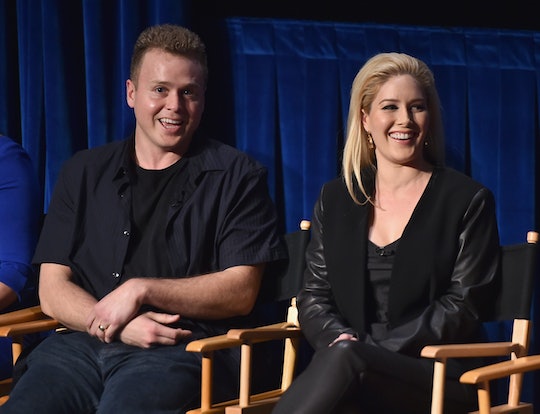 Even if you've never watched a reality show in your life, chances are you've heard of Spencer Pratt and Heidi Montag, the genre's most infamous couple. Their relationship is often credited with the downfall of Montag's friendship with The Hills costar Lauren Conrad, and the decade since drama began, they've appeared on almost every reality show with the word "celebrity" in the title. When news broke that Montag was pregnant, you might have been a little wary, but these Spencer Pratt quotes on fatherhood will shed some light on the reality bogeyman's parenting style, and what we can expect from him as a dad.

The thing about parenting is that it's constant, demanding, and (if you want to do it right) it often requires one to put themselves last. That seems like a bit of a challenge for a couple that frames all of their tabloid covers and makes a living by appearing on everything from I'm a Celebrity, Get Me Out of Here! to Celebrity Wife Swap, to a British documentary called Speidi: Scandal, Secrets & Surgery! (that's too many exclamation points to have around a sleeping baby, IMHO). Let's take a trip down memory lane and see how Pratt really feels about raising a kid.

In an interview with Ask Men, the site asked if Pratt ever planned on watching The Hills, the MTV reality show he starred on, with his upcoming child. His response was laced with enthusiasm. (JK, he wasn't into the idea.)

Hell no! They’d just lose brain cells. I’m trying to have really smart kids. With all due respect to Heidi and I, we cannot afford any less brain cells than they’re already starting with at the gateway.

"She was literally glowing."

So, did Pratt have a change of heart once Montag gave him the news that she was expecting? Here's how he described the moment to Us Weekly: "The look on her face, I can't even describe it. She was literally glowing. I thought she was about to say she made muffins or banana bread." That must have been really disappointing.

"I kind of signed up for late night duty."

When Ask Men inquired about his forthcoming parental duties, Pratt said: "I imagine since I can stay up later — I usually watch movies late into the night — I’ll end up being responsible for when the baby’s crying and staying up, cause I’ll already be up. So I kind of signed up for late night duty. I definitely don’t see myself changing any diapers."

"I'm gonna teach this kid how to Snap."

Most parents are eager to use their past mistakes as learning experiences, and make sure their kids don't follow the same thorny paths as they did. Pratt's kind of... up in the air about that, though. People reported that during a chat with the Allegedly with Theo Von & Matthew Cole Weiss podcast, he noted that "You can’t just do whatever you want like I did ... certain moves professionally can sabotage your future." But on the other hand, "We live a new world where everyone's a fame wh*re, so I'm happy to let him be at an advanced level." Accordingly, he and Montag chose their child's name based on which Twitter handles were still available.

"Proudest day as a father."

Gunner Stone Pratt (really, nobody had that name already?) was born on Oct. 1, 2017. Just 17 days later, his Instagram account was verified. For Pratt, this was his "proudest day as a father." It's the small things in life, isn't it?