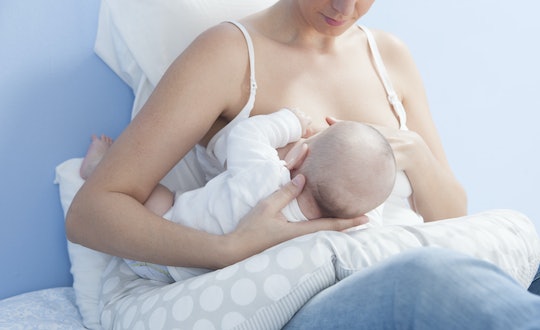 The topic of breastfeeding can be a touchy subject. There are a number of studies that show how breastfeeding affects both mom and baby, and every week, it seems like there's a new think piece about why mothers should breastfeed their babies. Or, alternatively, why it's not a big deal if they don't.

The short answer is yes, studies on breastfeeding show that it can affect the health and well-being of both moms and their babies. That doesn't mean that you're a total monster if you choose not to breastfeed your baby, of course — it just means that there's a lot of data to back up the idea that it's beneficial if you're on the fence about whether you want to breastfeed or not.

Mothers who breastfed for at least 12 months had a 38.6 percent chance of developing hypertension, according to a study published May 2009 in Obstetrics & Gynecology. That number might seem high, but it's not when compared to the alternative.

By comparison, among women who had children, those who didn't breastfeed had a 42.1 percent chance of developing hypertension, Scientific American reported. In general, the study found that women who breastfed for less than 12 months during their reproductive years were left with a higher risk for cardiovascular disease, diabetes, hyperlipidemia and hypertension.

Journal of Perinatology On Breast Cancer

For every 12 months a woman chooses to breastfeed, her risk of breast cancer decreases by 4.3 percent, according to a 2010 Journal of Perinatology paper by AM Stuebe and EB Schwarz. The researchers came to that conclusion based on meta-analysis of 47 studies on the topic.

Women who had never breastfed had a 1.4-fold higher risk of breast cancer, according to the paper. The analysis stated that the decision not to breastfeed can "adversely affect mothers’ health by increasing the risk of pre-menopausal breast cancer, ovarian cancer, type II diabetes, hypertension, hyperlipidemia, and cardiovascular disease." So it's in agreement with the Obstetrics & Gynecology findings on the link between several disorders and breastfeeding, and firm in its conclusion that breastfeeding is beneficial for a mother when it comes to lowering her risk of developing breast cancer.

Ovarian cancer ranks fifth in cancer deaths among women, according to the American Cancer Society. A woman has about a 1 in 75 risk of getting ovarian cancer during her lifetime, that organization reported. So it would stand to reason that any way to lower that risk should be explored, right?

The study ultimately concluded that, for women who had the opportunity to breastfeed, breastfeeding and increasing durations of breastfeeding were associated with a decrease in the overall risk of ovarian cancer. But authors of the study acknowledged that it had flaws, and in particular, noted that breastfeeding behaviors such as the duration of breastfeeding and the effects of night feeding should be further studied.

It's not just direct health benefits for the mother that are affected by breastfeeding. Medical costs are also a factor, and the United States could save around $13 billion each year on medical costs if 90 percent of women exclusively nursed their infants for the first six months, according to an analysis published in March 2010 in Pediatrics.

The report, led by Melissa Bartick of the Department of Medicine at Cambridge Health Alliance and Harvard Medical School, found that U.S. breastfeeding rates are "suboptimal," and result in significant, unnecessary medical costs, and tragic, preventable infant deaths. The analysis found that if 90 percent of U.S. families complied with recommendations to breastfeed exclusively for 6 months, a stunning 911 excess infant deaths could be prevented.

That analysis suggests that breastfeeding could lead to less medical costs, which impact both the country as a whole, and the finances of moms in particular who have to deal with those costs on their end. (It's important to note here that the above effects are not the fault of any mother. Breastfeeding support in the U.S. is greatly lacking and some women simply cannot breastfeed.)

The Office on Women's Health of the U.S. Department of Health and Human Services reports on its website that "the cells, hormones, and antibodies in breastmilk help protect babies from illness." It offers a ton of information on the health benefits breastfeeding gives to babies in general.

Specifically, the website cites a Pediatrics report entitled "Breastfeeding and the Use of Human Milk," from March 2012. That article reported that exclusive breastfeeding for three to four months can help to reduce the incidence of clinical asthma, atopic dermatitis, and eczema, and that even a reduction in leukemia is correlated with the duration of breastfeeding.

The article also reported a 36 percent reduced risk of SIDS (sudden infant death syndrome) associated with breastfeeding, among a ton of other findings related to breastfeeding and a baby's health.

Many other resources have made clear the benefits of breastfeeding on both mothers and babies. Everything from the latest mom blog to fact-checked, clinical studies report on these benefits. So if you're unsure whether breastfeeding is the choice you want to make, do some research and see if these studies, as well as others, help you to make your decision.