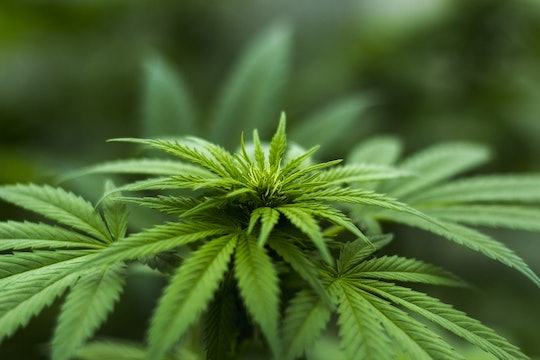 The legalization of marijuana use in the U.S. has been a hot topic of debate in recent years. While many states have taken measures to allow for medicinal and/or recreational use, it still remains an illegal substance on the national level. Yet, even in states where recreational use isn't legal, plenty of people continue to smoke marijuana in private — and many users are also parents. This begs the question: Is it safe to do with children in the house? These five studies on smoking marijuana around kids show parents should think twice before lighting up near their children.

Newsweek reported that recreational marijuana use is currently legal in Alaska, California, Colorado, Nevada, Oregon, Washington, and Washington, D.C. And starting in July 2018, Massachusetts will join the list. (Legalization has also been proposed in Maine.) Considering this growing trend of pot legalization — and of parents being open about their marijuana habits — it's probably a good idea to consider potential risks to kids when it comes to secondhand exposure. Here are five studies that explore what effects parents smoking marijuana might have on children, whether in-utero, or through inhaling secondhand smoke.

1. It might be safe during pregnancy, according to an older study.

Inhale MD reported that a study published in the West Indian Medical Journal in 1991 showed no difference in children of mothers who smoked marijuana during pregnancy compared with children whose mothers didn't. A group of 59 Jamaican children whose mothers smoked marijuana during pregnancy was compared against a control group of children whose mothers did not smoke marijuana while pregnant. The children were examined at one day old, three days old and 30 days old to assess them on 28 behavioral points and 18 reflex points, such as breathing, temperature regulation, and motor control. Children in the study were also tested at ages 4 and 5 years old, and were measured on six criteria: Verbal abilities, perception and performance, quantitative, composite, memory, and motor skills. According to the publication, the study found:

The results show no significant differences in developmental testing outcomes between children of marijuana-using and non-using mothers except at 30 days of age when the babies of users had more favourable scores on two clusters of the Brazelton Scales: autonomic stability and reflexes.

2. Smoking marijuana during pregnancy can cause impulsive behavior in children.

This study was published in 2008 in Alcoholism: Clinical and Experimental Research, according to Inhale MD. It explored the effects of pregnant mothers’ marijuana use on their children’s executive functioning. Like the first study, this study compared the children of substance-using mothers against a control group. The study found that “prenatal marijuana exposure may affect preschoolers’ performance in a domain of EF [executive functioning] associated with inhibitory control," according to the publication. Translated: Prenatal exposure may affect the kids' ability to intentionally suppress or delay an action or behavior.

A study published in December 2016 shows that children absorb chemicals from secondhand marijuana smoke. NPR reported this small study involved 43 children between the ages of 1 month and 2 years who were hospitalized from bronchiolitis in Colorado, (where recreational marijuana use happens to be legal.) The children's urine samples were sent to the Centers for Disease Control and Prevention, which used a highly sensitive test that is able to detect very low levels of marijuana metabolites. What the study found was that 16 percent of the samples tested positive. Furthermore, for the children whose caregivers said they had been exposed to marijuana use, 75 percent ended up having traces of the drug in their urine.

"This is the first time we've been able to demonstrate that there are detectable marijuana metabolites in the urine of children who've been exposed to marijuana," said Dr. Karen Wilson, a pediatrician and lead author of the study, according to NPR.

As Medpage Today reports, a July 2016 study from the University of California San Francisco showed a negative side effect to secondhand marijuana smoke. In fact, one minute of exposure to secondhand marijuana smoke was associated with "substantial transient impairment of vascular endothelial function," according to the study, which used rats and was published in the Journal of the American Heart Association. Blood vessels in the study took 90 minutes to recover function following 60-second exposures to marijuana smoke. This is compared to a 30-minute recovery time after 60 seconds of secondhand tobacco smoke.

6. Smoking marijuana during pregnancy may cause low birth weight.

A 2012 study published in Pediatric Research looked at 24,874 Australian women over seven years. It found that “the use of Cannabis in pregnancy is associated with increased risk of adverse birth outcomes," according to Inhale MD. “Persistent use of Cannabis may result in decreased uteroplacental perfusion [blood flow] and intrauterine fetal growth restriction.” Still, it's worth pointing out the the study also recognized that other studies had both supported and disputed these findings. So it's tough to say for sure.

Because so many of the studies out there on the effects of secondhand marijuana exposure are contradictory, the safest bet is for parents to keep it as far away from children as possible. Smoke outside. Abstain from smoking during pregnancy. Because as with cigarette smoke, it's one thing to willingly expose yourself to potential negative health consequences — but to expose a child who has no say in the matter is an entirely different story.