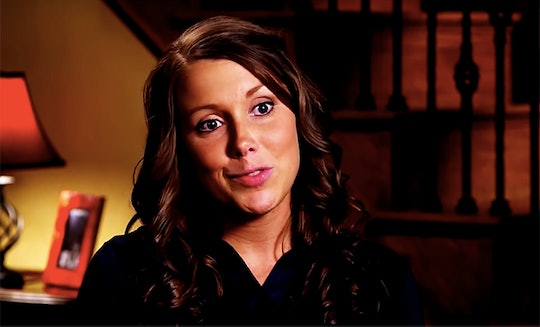 In the early days of 19 Kids & Counting, Anna Duggar dutifully played the role of Josh Duggar's wife. From the first moment fans met a young Anna pre-engagement to the birth of the couple's first child, her life appeared to be completely centered around Josh. But following Josh's Ashley Madison cheating scandal in August 2015, fans got to see new side of Anna. For the first time ever, Anna got to speak without Josh by her side and she earned her own spot on 19 Kids & Counting's spin-off, Counting On. Needless to say, many viewers were intrigued by this new version of Anna, and people continue to have a lot of questions about who she is as a person today. That being said, here are five surprising facts about Anna Duggar.

On the surface, Anna appears to be a low-key and soft-spoken person in comparison to the Duggar kids. Although Anna grew up in what most people would consider to be large family (7 siblings, to be exact), she had to make a lot of adjustments to fit in with such a massive brood like the Duggars. And one might theorize that Anna mostly remained behind-the-scenes throughout the years in an effort to keep her head above water as her in-laws navigated fame. It goes without saying, however, that Anna is just as complex and interesting as anyone else in her famous family. So, without further ado, here are five surprising tidbits of info about Anna.

She Waited Until Age 18 To Get Engaged

Interestingly enough, Anna was adamant that she didn't want to get engaged until her 18th birthday. Anna's stipulation is a surprising one because it's not uncommon for people who share her religious beliefs to start considering marriage seriously before age 18.

What isn't surprising, however, is that Josh proposed to Anna on the exact day she reached her milestone. As Anna enjoyed a lunch with her parents at a restaurant called Gator Landing in Florida, Josh surprised her with a bundle of balloons and an engagement ring.

Her Parents Are Reportedly Stricter Than The Duggars

Considering Michelle and Jim Bob have a laundry list of strict dating rules that they impose on their kids, it's difficult to imagine that Anna's parents could be more firm than the Duggars. But as it turns out, Anna's mom and dad, Mike and Suzette Keller, ran a very tight ship.

“Her [Anna] parents are even a little more extreme," a source told People about the Kellers versus the Duggars.

Making matters even more interesting is that Anna's chats with her mom were scheduled. “They always got 15-minute, one-on-one sessions with their mom every week," the insider added, according to People. "That was the time to share their feelings, but other than that they had to keep their feelings to themselves.”

She Crushed On Josh Before They Actually Met

It's understandable that many people have questions about how Anna and Josh first met. The two did grow up in separate states (Florida and Arkansas), after all.

So, when did Anna first learn of Josh? In a surprising twist, Anna had a crush on Josh after she noticed him on an episode of 14 Children & Pregnant Again that aired in 2004, according to SheKnows.

Anna said about becoming smitten with Josh, according to InTouchWeekly:

As my family watched the video, I noticed how Joshua, then age sixteen, shared the importance of guarding his heart and waiting for someone who would really love him and wasn’t going to just get carried away with their emotions. I was so excited to see another family who was brought up so similar to the way our parents were training us, but never would I have dreamed what God had in store!

She Has Worked With Women In Prison

What most people don't know about Anna is that her parents spent the majority of their lives working as prison ministry missionaries. Essentially, this means that the Kellers counseled inmates on religion.

Making this tidbit of info even more compelling is that Anna would often tag along to the prison with Mike and Suzette to speak with women inmates, and she has opened up about these experiences on 19 Kids & Counting.

She Was Supposedly "Bossy" Growing Up

Considering how chill Anna comes across, it's hard to imagine her being "bossy." Still, a source contends Anna was forceful with her brothers and sisters during their childhood. “She’s [Anna] really fun. She was always the bossy sister, but in a fun way," an insider told People. If she and her siblings were playing a game, she would make sure they were doing it exactly by the rules. They always had a good time together.”