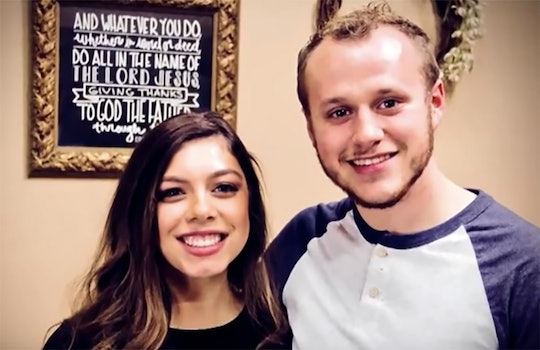 Just six weeks after Josiah Duggar and Lauren Swanson announced their courtship, they shared their engagement news with fans on Monday, according to Us Weekly. Yep, another Duggar is set to walk down the aisle, and Counting On viewers couldn't be more thrilled about the development. But who is Swanson, exactly? Considering the brevity of Swanson's courtship to Josiah, it's reasonable that fans want to know more about his future wife. And if you're one of those curious fans (don't worry, you're not alone), you'll probably want to check out these five surprising facts about Lauren Swanson. As it turns out, Swanson's life is chock full of interesting tidbits.

If you missed the engagement news, rest assured that it played out like the many other Duggar proposals before it. After a whirlwind courtship, to put it mildly, Josiah proposed to Swanson while she was out on the town with her girlfriends. After Josiah surprised Swanson, he whisked her away (chaperoned, of course) to a property that holds special significance to her family. “The place where I proposed to Lauren is the exact spot where her parents were engaged," Josiah explained, according to TODAY. "There’s a lot of family history on this property, making it a special place for Lauren.” As some fans might recall, Joseph Duggar pulled a similar stunt when he proposed to his then-girlfriend, Kendra Duggar, at the site of his childhood home.

While it's not certain if Josiah asked Joseph for his input in the proposal, it's clear that Swanson was moved by the gesture. Swanson shared, according to E! Online:

I’m really excited to be getting married to Josiah. Everything about the engagement was such a special moment for me. I’m especially looking forward to spending the rest of my life with him!

Of course, there's more to a person than what they reveal in their engagement announcement. So, what surprising facts about Swanson are hidden beneath the surface? Check out five little-known bits of info about Swanson below.

Her Mother Is Reportedly Pregnant

Per multiple reports, Swanson's mom, Lana Swanson, is pregnant with her ninth child, according to OK! Magazine. Although it's not clear when Lana is due, fans will probably find out about the reported pregnancy on a future episode of Counting On.

And while some might find it surprising that Swanson's mom is pregnant, it's probably no biggie to the 18-year-old, who is the oldest of her eight siblings. Josiah, in comparison, is his parents' eighth child.

She Might Have Moved To Arkansas To Pursue Josiah

Per a report from the Inquisitr, Swanson's family reportedly moved from Georgia to Arkansas so she would be able to pursue a courtship with Josiah. I imagine it's sort of difficult to court long-distance.

The good news is the Duggars are long-time friends of Swanson's family, so the reported transition to Arkansas probably wasn't too difficult.

As shocking as it might be, Swanson isn't the first woman Josiah has dated. In April 2015, Josiah announced his courtship to Marjorie Jackson, a close friend. Just a few months after the announcement, however, the couple called it quits.

A joint statement from Jim Bob and Michelle Duggar explained at the time, according to E! Online:

Both Josiah and Marjorie have enjoyed getting to know each other and to build their friendship over the past months. We are so grateful that they each are seeking the Lord's will for their future. A few weeks ago, Marjorie and Josiah agreed to end their courtship, keeping in step with what they believe the Lord's will is. Both are thankful for the time getting to know each other and their families continue to enjoy each other's company and close friendship. As parents, we are very pleased to see two young people searching out their futures with God's will as their first priority!

She Doesn’t Use Social Media

Although it might not be too earth shattering that Swanson doesn't have her own Instagram account, it's a bit surprising when you consider Josiah's ex, Jackson, is very active on social media. While Swanson and Jackson both come from conservative backgrounds, it's clear they have different views on social media.

Adding fuel to this mystery is the fact that Josiah has an active Instagram account. One has to wonder why Josiah is allowed to have an Instagram while Swanson isn't. Another possibility is that Swanson chooses not to be online.

Yep, it looks like it's not against the Duggar courtship rules for Swanson to FaceTime with Josiah. This unforeseen revelation surfaced on Feb. 20 after Josiah shared a pic of himself chatting with Swanson, a moment he captioned, according to Instagram:

Anyone who knows me knows that I’ve always been a talker. But now I love being a listener, too. #facetimewiththebest.

As you can see in the snap above, it appears that there are no chaperones (at least visible ones) during this call. When you consider Swanson's parents are ultra-conservative, it's a tad shocking that she's allowed to FaceTime.